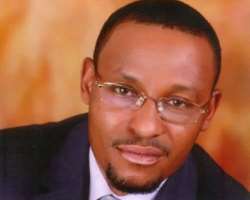 Danladi Umar is a 49-year-old Nigerian from North Central area of Nigeria who currently heads the Abuja based Code ofConduct Tribunal (CCT), a federal entity for the prosecution of public officers who violate asset declaration laws in the country.

For the naked eyes two words stands out. “Conduct” and “Prosecution”.

Umar a lawyer by profession, was apparently caught on camera physically assaulting a security guard at Banex plaza in Wuse, Abuja.

Here is the footage: https://youtu.be/YwYkhjJ5I-s.
In addition to the open physical mistreatment, he was observed, viciously angry as he violently kicked the guard before he was restrained not only by some good Samaritans but by the police officers around him.

In fact, the police officers as observed in the camera had to swiftly push Umar into his vehicle to stop his further attack on the security officer. Apparently for his own safety also.

The guard’s offence according to eyewitness was for simply doing his job, by asking Umar to park his car very well at the plaza, a remarkably busy commercial spot. Onlookers and witnesses who were outraged and incensed could be heard uttering the following:

Umar’s observed actions almost spiraled out of control, as some in the crowd responded to the uproar and reportedly startedstoning the vehicles in the Umar’s convoy, shattering their windscreens and windows.

For Umar, apparently inflicting a bodily injury on the security officer, he was not only causing mayhem, and chaos, he could have created a dangerous environment of hurt not just to himself, the police officers but to innocent persons including children.

This official misconduct by Umar is reminiscent of anotherincident in Abuja in 2019, when Senator Elisha Abbo of Adamawa North was caught on camera slapping a nursing mother repeatedly at a sex toy store.

Just like the senator who called a policeman and ordered the arrest the shop owner, Umar used his power falsely, leading to the arrest of security guard. For the quick assistance of a lawyer, Ihensekhien Samuel Jnr, and the good judgement of the Divisional Police Officer of the station, who viewed the video recordings the security officer was released on bail. In fact, Umar should have been immediately arrested for the apparent physical assault, and for allegations of excessive force by a judicial officer and released on bail or kept in the cell followed by a court appearance.

As done in most democratic societies, due to Umar’s professional presence in the government, a magistrate or judge will order a psychiatric or psychological evaluation to assess hisrisk for further violence in the community. Umar as a government official, for apparently violating the security officer's civil rights should be in the interim, suspended from office, and face a lawsuit. This is not the time for begging or crying for forgiveness.

No matter how this case ends, Barrister Umar just like Senator Abbo, could gain from psychological self-control counseling and ethical orientation to help public officials like him with public misconduct issues, learn ways to maintain proper conduct and ethical behavior expected of a public official.

Danladi Umar, reportedly once stated that he is not answerable to any institution but the President. Well, this conduct calls for the President’s attention now.

Nigeria will get there institutionally and democratically.