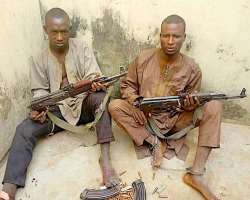 Five suspected kidnappers in Abuja have been arrested by the Federal Capital Territory Police Command.

The men were linked with recent kidnappings at Kiyi Village.

They were nabbed between Friday 26 March and Sunday 28 March in a coordinated operation by operatives from Dawaki Division and the Command’s Anti-Kidnapping Squad.

They have confessed to supplying logistics to the kidnap syndicate operating in Kiyi Village.

Two AK-47 rifles, one Bajaj motorcycle, and thirty rounds of live 7.62mm ammunition were recovered from the suspects.

According to ASP Yusuf Mariam, FCT Police Public Relations Officer, efforts are underway to arrest other members of the syndicate.