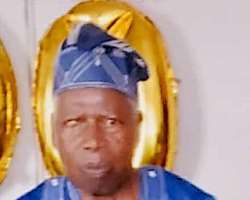 The great educationist who celebrated his 90th birthday last year died after a brief illness at Orin Ekiti , Ekiti state. He attended the Wesley College and later Ahmadu Bellò University where he studied Fine Arts graduating in 1964. For many years, he was a teacher at Wesley College Ibadan and former Vice Principal, Principal LATTC Ibadan from where he joined the services of University of Ife , Adeyemi College of Education, Ondo where he rose to be Head of Dept of Fine and Applied Arts and Later Dean of Arts Faculty of the Institution.

A bronze caster, his last research before retiring was the _cire - Perdue _( the lost wax technique of bronze casting reputed to have been used for most of Benin Bronze) Also a poet his yoruba poetry won the first prize at the Yoruba narrative poetry competition in 1966, He is author of _Ajidewe_ ,a yoruba poetry book and many other publications such as _Esie stone figures 1963_, _Ekiti Carved doors 1964_,

Faturoti upon his retirement in 1991 to his home town Orin Ekiti continued to practice as a sculptor and Bronze casting producing great artworks and bust of personalities such as Late Col Fajuyi Installed at Fajuyi park Ado Ekiti, bust of Prof Adegoke Olubumo, Nigeria’s first Mathematics Professor, and Prof Cyril Onwumechili former VC University of Ife. He set up Faturoti Art Studio in Orin from where he continued to host Art exhibitions and train young and budding sculptors. Some of his popular carved wood works include _Obitun , _Ere Oloba of Ado Ekiti, Ajagbo dancers etc. A humane community leader and strict disciplinarian, Faturoti was noted for his honesty and integrity .His record keeping capacity and knowledge of history was legendary.

A staunch leader of Methodist Church, Faturoti is survived by his wife, children and grandchildren.