Calls For Restructuring, Regional Autonomy And Secession Will Not Yield The Long-term Aspirations Of Nigerians For A Better Life - Rotimi Amaechi 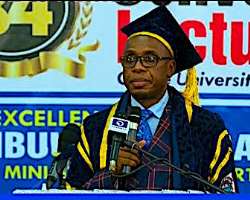 Minister for Transportation, Rotimi Amaechi has expressed that the calls for restructuring, increased regional autonomy and secession will not meet the long-term aspirations of Nigerians for a better life.

He stated this while delivering the 34th convocation lecture of the University of Calabar, titled ‘Beyond our Imperfect Union: The National Question and Nigeria’s Future’

Amaechi expressed that it was unfair to blame the administration of President Muhammadu Buhari, for the rising poverty rate in the country as the problem preceded the current administration.

He, however, stated that the concerns raised by Nigerians about the future of the country were legitimate and indicated “great patriotism and love.”

He explained that the concerns could only be addressed successfully if Nigerians stood united as one nation in spite of all challenges.

“In recent days, we have begun to hear loud voices of disunity from various sections of the country. In response to current economic difficulties and the problem of insecurity, some have insisted on the now-familiar argument for restructuring of the federation.

“Others have advocated increased regional autonomy. Some extremists are calling for secession of parts of the country from the federation.

“None of these divisive options would serve the urgent needs of this nation or the long-term aspiration of all our people for a better life in a happier nation.

“Let me say without any fear that the concerns being raised by Nigerians about the future of our country are legitimate.

“They are indications of great patriotism and love. We all treasure this country and are anxious that it transforms into a better place for all of us. This overwhelming wish for a better Nigeria far outweighs the doomsday predictions of a few pessimists.”