Dearth amidst abundance: the disheartening tales of water scarcity in Nigeria 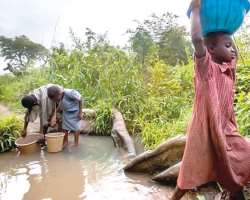 My title from a literal perspective appears to be contradictory. However in the real sense it contains some hidden truths which at the end of this piece I will be able to have unraveled and unearthed.

Water has been countlessly proven as a necessity for both the sustenance of both humans and animals. In scientific fact, it accounts for a large proportion of the human body and the earth's surface.

This may undoubtedly be the reason several governments work assiduously towards ensuring that its citizens have access to pure and potable water for their daily living and to prevent the emergence of water borne diseases which are the end results of using untreated water.

The reality of things overtime has proven that the above steps especially in Nigeria's context have failed to achieve the desired results. This has led to water scarcity and the likes.

The media in recent times have reported the emergence of water shortage in choice cities such as the federal capital territory and some other cities in the coastal areas. With all these gradually becoming a daily occurrence, one is forced to ask? Who will water Nigeria's dry streets towards making it flourish again.

The current administration headed by President Muhammadu Buhari had continually reiterated it's commitment towards ensuring that Nigerians have access to clean water which an be utilized for both domestic and industrial purposes. But with the current state of things, one may be forced to fault this claim.

The several initiatives put in place such as the rural water agency for citizens residing in the grassroots and the establishment of a federal ministry of water resources among other things was meant to have given a boost it the quest to access safe water in Nigeria.

Apart from this, there are several dams and rivers such as the kainji, hadejia etc which could have complimented the various initiatives of providing water to the populace. Nonetheless, the current status of events has substantiated the fact that many Nigerian homes do not enjoy access to harmless water in their houses. Some others have supplies of water that are inconsistent with average daily demands.

This according to the Nigerian bureau of statistics and the safe water Initiative, a non-governmental organization is a system breeding serious troubles for the health of the average Nigerian especially in the long run.

Without making unverifiable claims, the whole scenario tantamount to the motion that the incessant scarcity of water are by products of irregularities in the national water system. Thus, the government has failed in its plan of improving the wellbeing of Nigerians with respect to the provision of water which are essential ingredients for growth and development.

Water consumers are therefore faced with the challenge of making provisions for themselves. This is through digging Wells, erecting boreholes which sooner or later cause challenge for the earth. This is due to the constant vibrations which in the long run spell doom. Closely tied to this is the noise which some of the instruments used in constructing these facilities pose to the environment.

Some lenders of these facilities in a bid to get rich quickly charge the public when using some of their facilities. That is those who cannot afford to erect their own Wells or boreholes look for alternatives. Some even go as far drinking from ponds and streams.

For those into agricultural business especially fishing and crop production, the yearly losses they incure cannot be recounted. This is undisputable since water are essential things for crops and fishes to survive.

Is this not ridiculous to say the least?
What then is the essence of the yearly billions budgeted for the rehabilitation of dams and connecting each household to the national grid?

Amidst all these, many are forced to endure the hardships of hikes and tariffs brought by water supply agencies and companies monthly. This in the words of the government are essential for the provision of clean and potable water.

From the look of things, Nigeria seems to be a desert requiring streams to flow. The question that need to be asked at this juncture is Who will take the bulk by the horn and open up fountains of water to make the dry lands flourish again?