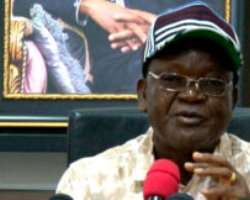 A group going by the name FUNAM, which claims to be a Fulani group out to protect Fulani interests, has claimed responsibility for the attempted assassination of Governor Samuel Ortom.

The group vowed to get the governor ultimately for standing against Fulani interests.

The group made their claim in a press statement , in which Ortom's name was badly misspelt multiple times.

According to the statement signed by one Umar Amir Shehu, “Our courageous fighters carried out this historic attack to send a great message to Ortum and his collaborators”.

It reads further, “Where ever you are, once you are against Fulani long term interest, we shall get you down.

“This is a clear warning. We hope those who take us for granted will get the indisputable message.

“Our intention is unequivocal: TO KILL HIM. That mission will one day be fulfilled and very soon too”.

The group did not stop at its message on Gov. Ortom; it also warned southern states, whose governments maintain hard stance on herders activities, that it’s fighters are coming for them too.

The group said further, “We warn collaborators working against Fulani people across Nigeria: WE SHALL GET YOU irrespective of your hidden place.

“We state clearly, any state or individual that opposes RUGA will be confronted. Any State or individial(Sic) that opposes ranching, we shall get you. Speak against ranching and RUGA even on the internet: Our Noiseless fighters shall find and fix you.

“In the next few months, FUNAM will carry out attacks on strategic human and material assets of States and Non State groups or individuals known for their anti-Fulani campaigns.

“We shall hunt you down in your houses, in your work places, in your car, in your streets. It's a matter of time.”

It is not clear whether FUNAM actually exists or just some mischief makers masquerading in that name to heighten tension in the land.

In 2018, the group had triggered some furore in Nigeria, when it claimed the Fulani are the owners of the Nigerian territory from Sokoto to the Atlantic.

Sultan Abubakar of Sokoto, the spiritual head of the Fulani, doubted the authenticity of the group and disowned its statement as reckless.

The group has made several incendiary statements thereafter, without any consequence.

In February 2020, the group in a statement by its president Badu Salisu Ahmadu claimed a special Fulani strike force was responsible for the killing of 23 people in Plateau in late January of the year.