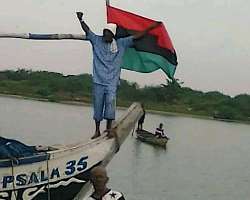 The militia wing of Biafra Nations League, BNL said it has given oil companies operating under Nigeria in Bakassi Peninsula quit notice. The group said that Nigeria benefits 60℅ of the oil in the region and uses the money to sponsor the military to kill armless pro Biafra supporters in Imo and Rivers States. Speaking from the Gulf Guinea, the BNL operational commander who is nicknamed "Asorock Commander", a native of Bakassi said that the government have no right over Bakassi oil hence it handed the territory to Cameroon without considering the plights of the people. BNL said that even Cameroon authority can not fight them, adding that Boko Haram is already fighting four countries. "We have asked the oil companies paying tax to Nigerian government to evacuate. No deadline is given as we can chase them away anytime. They cannot be drilling our oil to be developing the north and sponsoring military operations against us. Not even Cameroon can stop us otherwise we will engage in full blown militancy. Boko Haram is fighting four West Africancountries without being defeated".

BNL warned groups in the Niger Delta rejecting Biafra not to be an obstacle to the freedom of the East. According to him, it is only Biafran State that will settle the case of Bakassi as the people are fully backing the movement. They cautioned the groups who were reacting to Asari Dokubo's Biafra De Facto Customary Government not to see Biafra as a threat and warned the groups not to carry their hate campaign to Bakassi.