Sunday Igboho And The Farce Of Oduduwa Republic 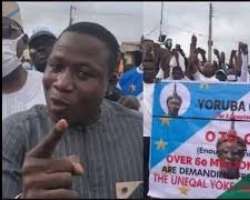 When Sunday Igboho commenced his crusade, I opined that he is a logical consequence of a failed system, and, that, as a political thug that he is, he will always thrive on violence. My assertion was exhibited by Sunday Igboho a few days ago, when him and Prof. Banji Akintoye sat side-by-side to declare the secession of the Yoruba people citing marginalisation, pseudo-federalism and some flaws in the Constitution of the Federal Republic of Nigeria, 1999 (as amended) as excuses.

Sunday Igboho, during the press conference boasted that he will be leading an Army of their newly-declared nation to open all closed borders in the South-West, and, that, they will be marching to Apapa to claim the Seaport. If we are to go by the narrative that Sunday Igboho is suffering from chronic illiteracy, what then should we say of Prof. Banji Akintoye? Is it senility? For a fact, someone needs to tell Prof. Banji Akintoye, Sunday Igboho and their acolytes that, the fact that the Yoruba people are geographically close to the Atlantic does not make us the owner of the Seaport and some other things therein in so far it was not independently constructed with the treasure accrued from the South-West, but, that of the Nigerian people.

And, if we are to go by the blind narratives of Prof. Akintoye and Sunday Igboho who are laying claim to the Seaport because of its geographical location, it will not be out of place for the people of the South-South to also lay claim to it because it was built basically with revenue that was gotten from the sales of crude oil deposited in the South-South.

There is no doubt that the country has never been this divided. And, the reason for this is not far-fetched; Injustice! Though, this forced marriage by Lugard is meant to fail, but, it can never be made possible by the approach of some persons who believe that they can dictate the way to go for the Yoruba people, most especially when it is coming from an uneducated political thug who knows nothing about the Constitution, not to talk of having the knowledge of how the basic institutional frameworks of government operates. He is an unreasoning chatterbox that breathes violence, which is why his approach towards self-determination of a people is manifestly wrong, and, no amount of justification been spinned by some persons can change that posture.

It will amount to complete inanity to trust a man who has been living his whole life on political patronage when it comes to the fight for self-determination. Prof. Akintoye and Sunday Igboho are obviously pursuing their selfish interests by trying to masquerade as patriots in order to cajole unsuspecting members of the public into believing them as lovers of the Yoruba people. As a matter of fact, these two characters have proven to have no raw and unpolluted strength of character, no purity of thought, no independence of disposition, and, no rational analysis of events from a detached standpoint.

The events of recent times by these elements are capable of inciting anarchy, chaos, disloyalty, indiscipline, insubordination and rebellion, which might lead to sabotage, schism, sedition, subversion, treachery and open-violence. In fact, if there were to be a Yoruba nation today, the same manner in which their ancestors fought one another in totally unnecessary civil wars for more than a hundred years before the arrival of the British will be exhibited all for the sake of proving seniority. In fact, the internal war will be more tensed now that the affinity and respect for Ile-Ife and the acknowledgement of that town as the spiritual home of the Yoruba people, and, finally, the acceptance of the Ooni of Ife as ” the living manifestation of Oduduwa, and God’s chief representative on earth” is being questioned by the Alaafin who ultimately has the loyalty of Sunday Igboho.

So, rather than jumping from pillar to post, exhibiting madness, the Yoruba people should be allowed to negotiate their existence through a plebiscite. And, in so far no plebiscite has been done, the show of both Prof. Akintoye and Sunday Igboho is that of comedy of the absurd most especially when considering the fact that the Prof. even said that a referendum will be conducted after they had declared their so-called Republic.