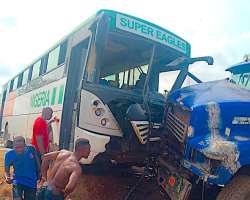 Members of the Akwa United FC team have been involved in a motor crash along Ezionye Express Road in Enugu.

One player and two officials of the club sustained injuries during the accident and have been taken to the hospital.

The bus was conveying the team from their base in Uyo to Kaduna for their match-day 15 tie versus Jigawa Golden Stars was involved in a head-on collision with a truck.

The club’s media officer, Mfon Patrick, who did not mention the injured player’s name and officials simply said they were rushed to the hospital.

“We have been involved in an accident along Ezionye express road in Enugu on our way to Kaduna for our NPFL match-day 15 game against Jigawa Golden Stars.

Recently, Wikki Tourists team bus was razed by fire on their way to Uyo for a clash with Dakkada FC.

Days after, Kano Pillars team bus was razed by fire on their way to honour an NPFL match in Makurdi, Benue State.

Similarly, the bus conveying Adamawa United players was attacked by gunmen while on their way to Lagos for their game against MFM FC, with their bus driver kidnapped, but released days after.