Men of God or gods of men? 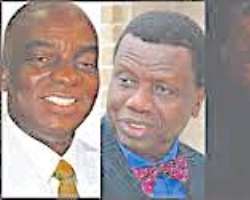 Christianity to some persons, is no longer about a living a simple life of contentment, gratitude and heavenly treasures but the mundane quest for power, money and fame.

Ironically, some of these men of God primitively accumulate wealth as if that would pay their ticket to heaven. Except if the story of Jesus Christ and his apostles is yet to be completely elucidated, one will continue to ponder if some of these ‘men’ are truly living by the examples of Christ.

Church business to some of these men, is good business. Imagine receiving material possessions, in exchange for promises of spiritual blessings to followers. So many persons have become vulnerable and dominated by their quest for immediate needs, that a deceitful man will always find plenty who are ready to be swayed, even if it means bathing them in a river or pond with naira notes.

As the days go by, tales and news emanate about the activities of some self-acclaimed men of God, who in their dire quest for wealth, fame and power, indulge in human rituals and other nefarious activities that are purely against the teachings of Jesus Christ, our Lord and Saviour, whom they preach to their followers.

Daniel, who are you to judge? Yes, I totally agree with this notion too, but the truth has to be told, even if it means telling it to the gods.

It becomes more irrational, when some of them use their wealth and affluence to oppress and intimidate their congregation, some of whom laboured to give 10% as tithe, after they had stayed under the scorching sun, to sell pepper and tomatoes.

This poses the question as to whether they are men of God or gods of men? This is where the issue of show off sets in. Some of them go about flaunting private jets, cars, houses and other luxuries bought with the tithes and offerings of believers, forgetting their tales of heavenly treasures.

They tell stories of heaven and its beauty whereas they are more concerned about living the heavenly life, on earth, themselves. Religion is indeed, an opium for the masses. In His mercies, may God continue to bless the genuine men of God and not the gods of men, who have kept the faith and stayed true to the ideals of Christianity as epitomized by Our Lord and Saviour, Jesus Christ.