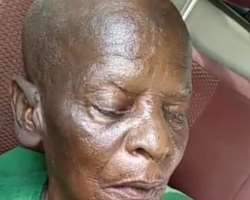 Fani-Kayode described Wakili as the godfather of terrorism in the Southwest.

Recall that OPC members had captured Wakili in the early hours of Sunday.

The Oyo State Police Command had confirmed the arrest of Wakili in a chat with DAILY POST.

However, the former Aviation Minister, in a series of tweets, identified Wakili’s son, Abu as the “enforcer” of the herdsman’s terrorist act.

He alleged that Abu had killed 10 innocent Nigerians and four more after his father was captured.

According to Fani-Kayode: “I congratulate my friend and brother, Iba Gani Adams, the Aare Ona Kakanfo of Yorubaland and the OPC for the successful capture of Wakili, one of the most barbaric and notorious foreign Fulani terrorists and cold-blooded killers, in the country. This is the way forward. Kudos!

“There is no doubt that the newly captured Wakili is the godfather of terrorism in the Southwest. However, the enforcer and “hard man” of his terrorist cell is his son, Abu. Abu killed 10 innocent souls 3 days ago and Chief Sunday Adeyemo (Sunday Igboho), who was utterly enraged and who sent pictures of their bodies to me one hour after they were murdered.

“Sadly, this morning, after the arrest of his father yesterday, Abu has killed 4 more innocent and defenceless souls. This is unacceptable. The boy is just a heartless and vicious beast and worse of all he is not even a Nigerian.”

Fani-Kayode urged security operatives to arrest Abu or ordered that he be shot on sight.

“He, like his father Wakili, together with most of the terrorists in our land, is a FOREIGN Fulani and not a local one. I hereby call on the authorities to locate, arrest and prosecute Wakili’s son, Abu, immediately or better still shoot him on sight,” he added.