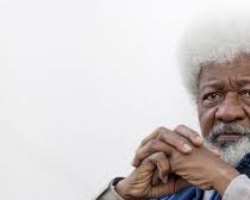 Professor Wole Soyinka, the Nobel Laureate has said that thinking Nigeria will work without restructuring is a sign of madness.

The Nobel Laureate price winner said that there was a consensus among Nigerians that the country must be restructured urgently.

He stated that anybody still asking what restructuring means despite the numerous explanations already provided should be ignored because such persons had chosen to be ignorant deliberately.

At the event, Soyinka called on State Governors to push for restructuring, adding that they should be more concerned about their citizens than the Federal Government.

Soyinka, who emphasised decentralisation of power and governance, cited the current security challenges as one of the reasons Nigeria needed to be restructured.

“There is a consensus that this country whether in terms of governance, economic relations, security, educational policy, cultural policy, etc, requires restructuring. Even the word ‘restructuring’ has been restructured in many directions, in cogent expression which will mean the same thing for everybody.

“For me, for instance, I emphasised decentralisation, reconfiguration…We all know what we have now is not working, it’s obvious and we can’t continue along the same line and say that it will work, it is sign of madness,” he said.