In Anambra, Police Arrest 3 Suspected Cultists A Day After Defeating 2 Others in Gun Battle 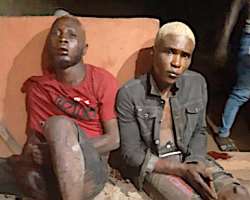 Anambra State Police Command has recorded another breakthrough in its fight against cultism, armed robbery and other criminal activities in the state, as it recently arrested three more suspected cultists.

The state's Police Public Relation Officer, CSP Haruna Mohammed made this known in a statement issued over the weekend.

According to him, the suspects were arrested at about 6:20 am on Sunday by the police operatives attached to the Command Special Anti-Cultism Squad (SPACS), following a credible intelligence report, and consequent raiding of the suspects' hideouts.

He further noted that the suspects confessed to be members of "PAYTON" and "VIKINGS CONFRATERNITY", assuring that the trio will be charged to court for prosecution after conclusion of investigation.

In a related development, the Command had earlier (on Saturday) arrested two suspected criminals and cultists, along Nkpor/Obosi Axis in Idemili North Local Government Area of the state, after defeating them in a fierce gun battle initiated by the hoodlums.

Confirming the incident to newsmen in Awka, the PPRO, CSP Mohammed said, "On the 27/2/2021 at about 5:30 PM, following a distress call that armed robbers were operating along Nkpor/Obosi axis; Police Operatives attached to the Command Special Anti-cult unit in conjunction with Scorpion Vigilante group, Obosi, quickly responded and moved to the scene. "On sighting the police,the hoodlums engaged them into a fierce gun battle. As a result, the two suspects sustained gunshot injuries on their hands and legs, leading to their arrest as follow: (i) Chiboy Ezike 'm' aged 25 years of Abagana in Njikoka L.G.A. of Anambra State, and (ii) Chiemere Ajuluchukwu 'm' aged 23 years of Awada Area.

"Suspects equally confessed to be members of a secret cult group called "Supreme Vikings Confraternity". Exhibits recovered in their possessions include Two locally made pistols and 10 live cartridges. Suspects were taken to the hospital for treatment after which they will be charged to court for prosecution."

In a reaction, the state's Commissioner of Police, CP Monday Bala Kuryas, fsi, reassured all Ndi Anambra that the Command under his watch will continue to work assiduously until crime in the State is reduced to the barest minimum.

Commending the well-meaning members of the public resident in the State for their cooperation with the Command so far, the CP also implores them to sustain and strengthen the cooperation, and to report any suspicious person(s) or movement(s) to the nearest Police Station or through the Command's emergency number 112 or 07039194332, for prompt response.