Nobody Will Die Because Apostle Suleman Has 3 Jets! 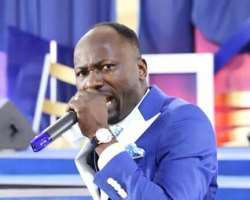 Not few Nigerian Pastors are pathological braggers. At any given moment, they would want their listeners to know the exorbitant price of their shoes, phones, suits and what have you. For example, Apostle Johnson Suleman was recently captured in a video that went viral on social media, and was in the video seen boasting about purchasing a new jet during the COVID-19 pandemic.

The short video of the clergyman preaching during one of his Sunday services surfaced on social media, and was also heard saying that he has a machine that prints money in his house.

The 49-year-old said he bought another Jet to add to his previous two while others were praying for Covid-19 pandemic to end due to the hardship that came with it.

As conveyed by the video, he boasted, “I have three. I was praying for COVID-19 not to end because I was resting. While people were complaining, my wife asked, ‘Can life be this sweet?’ Am I talking to somebody here?”

In the sermon, he gave the impression that he has the power to make wealth even under Covid-19 pandemic contrary to the scriptural injunction in Deuteronomy chapter 8 verse 18 that says, “But thou shalt remember the Lord thy God: for it is he that giveth thee power to get wealth, that he may establish his covenant which he sware unto thy fathers, as it is this day.” According to the foregoing scripture, it is only God that has the power to make anyone to become rich.

In as much as he is not the only clergyman in the country that brags so much, it is expedient to opine in this context that pastors unarguably resort to bragging they think it will sell them to their targeted audiences, or as part of an elaborate act, or because they haven't learnt that a self-blown trumpet is noise pollution to anyone but the blower.

It is not an exaggeration to say at this juncture to say that Apostle Suleman has for the umpteenth time got himself enmeshed in the labyrinth of bragging about his achievements as a clergyman. However, as a 'high-profile' Christian, not few Nigerians are finding this more than distasteful. I think it is the antithesis of Christ-like servant leadership, and I think it needs to stop. However much syrupy, spiritual language is drizzled over the proclamation of success and accomplishment, it still amounts to the same message: 'Look at me and all my wonderful successes'. Peel back the veneer of the shiny Christianese words and you find the boast, lurking in the shadows: 'fruit' used to mean lots of church members/ book sales/ money, 'gifting' meaning my awesome talents and excellent abilities, 'international ministry' meaning someone paid for me to fly somewhere on a plane – how cool am I?

Besides the personality of Suleiman in this context, high-profile Christians brag on the pages of their websites, they brag when they are interviewed, they brag from the big platforms they get to speak from, they brag in social situations, and they brag to anyone who will listen.

Permit to say in this context that I have some guesstimation about why this happens. First and foremost, they suffer from imposter syndrome, as many people in positions of responsibility do. They are therefore trying to convince both themselves and others that they are worthy of what they are being asked to do. But Jesus chose people eminently unsuitable and unqualified to be his inner circle and lead his followers after he left. Moses had a speech impediment and a horrible temper, Gideon was a coward, David was anointed as the future king of Israel when all he knew how to do was look after sheep. The point is, God does not choose people to do important jobs based on their impressive CVs. He chooses people who are obedient and happy to do what he asks.

They believe the hype, and have come to think very highly of themselves which has led them to feel no discomfort about proclaiming their own greatness. If this is you, can I let you in on a secret? No one likes a bragger. Your boasting makes us want to bring you down a peg or two. One of the most fundamental principles for good writing is 'Show. Don't tell.' Same applies here. Let others be the judge of your good qualities and accomplishments.

No one has ever called them on their bragging. They don't know they do it, and they don't know it is horrible to behold. This is where we all have to take responsibility. Deformations of character happen because no one loved us enough to tell us when we began to go wrong. This is a dangerous thing to do, but I'm asking you here to care enough for me to tell me if I ever become boastful. I can tell you now I will cry and probably be frosty with you for a couple of weeks, but once my bruised pride has stopped throbbing I will be deeply, deeply grateful.

Paul wrote that his only reason to boast was Christ, and Him crucified. If we have to brag, let's brag about our weakness, our failures, and our brokenness. In and through the truth of who we are, the glory of God is visible. Let's give credit where it's due, and shut up about the rest.

Now to worsen the matter on what can in this context be considered to be a faux pas, the clergyman reacted to the barrage of criticisms that have been trailing his boastings by saying, “No stress. I read on the Internet that there’s a rumour going around that I have a machine that prints money. I like that rumour. They say, ‘He should be investigated. He has a machine that prints money’.

“Somebody asked if it’s true and I said it is true. They said, ‘It’s risky o’. I said I didn’t know it’s risky because I already bought the machine. When you speak in tongues, you’re printing money.”

However, in the new video that surfaced online, Apostle Suleman said he made a mistake by saying “I was praying for COVID-19 not to end.”

He, however, added that those who are angry that he bought another private jet “will die.”

At this juncture, it is expedient to remind Apostle Suleman of the scripture that says,

In 2 Peter 2:18, “For speaking out arrogant words of vanity they entice by fleshly desires, by sensuality, those who barely escape from the ones who live in error”.

Against the power that is inherent in the foregoing scripture, I am in this piece declaring that “Nobody Will Die Because Apostle Suleman Has 3 Jets.