Nigeria's Unbalanced Plea For Amnesty: The Case Between Militants, Insurgents And Bandits 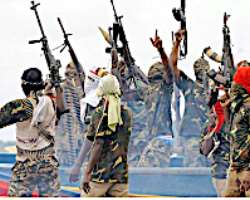 From close observation, what has been the clog in the wheel of progress of Nigeria isn't the presence of criminals or nefarious personalities but the inability to execute the dearest and choicest virtues of rule of law, equity and social justice.

Overtime I cannot but align my opinion with that of George Orwell's satire, Animal Farm, where he noted that some animals are much more higher than the other. The inability of both the leaders and the led (followers) to ensure that everyone is treated equally irrespective of gender, educational status and what have you has accounted for the reason for both our social, political and economic woes staring in the face and bedevilling our collective existence overtime.

In recent times, there have been series of pleas, requests and agitations to give amnesty to certain champions of Nigeria's insecurity crisis - militants, terrorists, and bandits. Before I proceed further, let me be quick to give a succinct explanation of the various groups highlighted above.

Militants were armed groups of people whose activities were mainly restricted to the Niger-Delta region of the country. Their activities which began in the late 1990s was mainly as a result of exclusion from the national treasury.

Does it make sense that an entity with avalanche of resources could be so poor to the extent of not being able to afford potable water? Yes, you can ask that countlessly to understand the agitations of these militants under the leadership of Asari Dokubo who utilised several means such as kidnapping of expatriates, vandalisation of pipelines to press home their demands.

Just as Nigeria was trying to nip the activities of these group of people in the bud, another group arose in the north eastern axis of the country utilising more dangerous ways such as bombing, using high profile mercenaries and lethal weapons among others to press home their demands which was mainly on implementing the Sharia law across the country and abolishing the necessity of Western education. Their request was mainly hinged on the refusal of the state government to fulfill its promises. As such, the group under the foremost leadership of late Yusuf Mohammed had to employ the instrumentality of violence to awaken the government to its responsibilities.

No sooner than this happened that the country experienced the conception of a more dangerous group which the Nigerian government has labeled as bandits. Apart from abducting their victims, these group of people in extreme cases, kill and maim without exercising any restraint. Unmistakably is the claim that bandits are Nigeria's sworn enemies not minding the activities of militants and insurgents.

Apparently aware of the deadly activities of the above mentioned tripartite groups who have sworn to continually disrupt the peaceful waters of the society of their demands are not met, the Nigerian government had called for a plea to grant amnesty and engage these groups in round table discussions that will proffer lasting peace. After all, conflict is inevitable in the society but it the paramount thing is suing for peace. Well, that is not the crux of the matter.

What then has caused the uproar?
What had caused unnecessary public outcry and uproar is why the government has decided to grant amnesty to a particular group and refused to reciprocate similar gesture to others. The failure of the government who are the masters and custodians of law to give the same wage to all without minding ethnicity has been the issue that has seemingly tore the strong threads or cords used in weaving the nation's fabric.

Is it appealing morally and ethically that some groups of people are shown the hand of mercy while others are not? Not at all. Would we then say that some crimes or armed militia groups are superior to others?

The present reality of things and state of affairs in the multi complex society christened Nigeria undoubtedly could be attributed to several years of failures especially in the area of leadership and administration. What has this resulted into? Ethnic profiling or bias, tribalism and other things which continue to tear the polity apart.

Some groups are more superior than others. Some tribes should be treated with warmth and love while others will have to endure hardships and ridicule are the vivid interpretations to the actions of our current political administrators.

While I am not against the practice of crime and criminality in the society. Notwithstanding, in issues such as this, it is expedient if not important to treat all groups equally. After all, the singular purpose of all the efforts is tailored towards ensuring that all groups sheath their swords, lay down their arms and armoury and embrace peace.

If continuous effort is made at granting amnesty to one group at the expense of the other, we may not be able to get over the consequences of these actions overtime. We all need be reminded that what applies to one applies to all. Or should we continue to endure the menace of these groups for a long while?