How Long Will NDDC Continue To Neglect Infrastructural Decay InIgbanke? 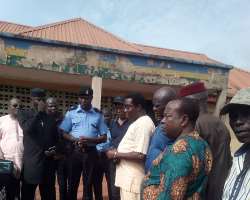 There is no denying the fact that whenever the name, Niger Delta Development Commission (NDDC), is mentioned that the visual image of either of Bayelsa, Rivers, Cross Rivers or Akwa-Ibom is usually the first to flash across anyone’s subconscious as the mandate States. Unfortunately, very few Nigerians understand the fact that Delta, Edo, Imo and Ondo are equally mandate States of the Commission. As gathered, a compromise was reached where leadership position would be rotated within the nine oil producing states; even as developmental efforts in all the States should equitably exerted. The most surprising is that most people do not know that Imo, Abia, Ondo and Edo States are equally members or rather mandate States of the Commission.

To the view of this writer, the foregoing is no doubt one of the nitty-gritties that might have prevented Igbanke from being a notable beneficiary of NDDC’s vision and mission that collectively offer a lasting solution to the socio-economic difficulties of the Niger Delta Region, in which Igbanke belongs, and to facilitate the rapid and sustainable development of the Niger Delta into a region that is economically prosperous, socially stable, ecologically regenerative and politically peaceful. Simply put, the commission was established in the year 2000 to assuage the fears of the people of the Niger Delta and address their concerns about the lack of infrastructural development in the region,

According to the popular online encyclopaedia, “Wikipedia”, “Igbanke is an Edo community in Edo State, Nigeria. It is located in Orhionmwon Local Government Area of the state. The people speak mainly Ika Language, which is an igboid or dialect of the Igbo language. For the sake of clarity, the same encyclopaedia explanatorily stated that “Igboid languages constitute a branch of the Volta–Niger language family. The subgroups are: Ekpeye, and nuclear Igboid which consist of Igbo, Ikwerre, Ika, Izii–Ikwo–Ezza–Mgbo, Ogba and Ukwuani-Aboh-Ndoni”.

More of a nagging problem is that a huge spectrum of Nigerian population are wont to erroneously think that nobody else is considered to be a Niger Deltan until he or she is seen to be an Ibibio, Anang and Oron in Akwa Ibom State, Andoni, Degema, Eleme, Ikwerre. Kalabari. Ndoni, Egbema and Okrika among other several ethnic groups in Rivers State. In the same vein, people in Cross Rivers erroneously believe that apart from those that speak either in Efik, Ejagham, Yakurr, Bahumono, Bette, Yala, Igede, Ukelle or Bekwarra that no other Nigerians, say in Imo State, Ondo State and Edo State, particularly the Igbankepeople in this context, deserved to benefit from the infrastructural developments been carried out by the NDDC.

Another reason that can be linked to the deprivation of Igbanke people from benefiting from NDDC’s developmental efforts is unarguably politics which has no doubt cast pall on the vision and mission of the commission.

That the Commission has been politicized can be inferred from Rivers State Governor, Nyesom Wike’s recent call that there was need to halt the politicization of the NDDC as he said it was time for everyone; irrespective of political divide to work together for the development of the region.

Speaking at the Rivers State Government house while receiving the Interim Administrator/CEO of the NDDC Barr Effiong Akwa, Governor Wike also cautioned against a repeat of people coming from other states to block entrance into NDDC as he warned that the NDDC doesn’t belong to any ethnic group but to all the people of the Niger Delta. If you ask me my take on the governor’s call, I will extend “Chop-knuckle” to him as he has said the truth.

In his response to the governor’s exception the governor took on NDDC, the Chairman of the House Committee, Tunji- Ojo told Wike that, “People outside Niger Delta believe development might not be possible in the region. The projects we have in Rivers state shows that Niger Delta can actually work. “We are here in line with section 88 of the constitution which empowers us to oversight agencies that we appropriate funds to ensure accountability, transparency, and the effective utilisation of public funds for the people of Nigeria. “I assure you that under the watchful eyes of this committee, we will ensure that NDDC works in synergy with critical stakeholders of the region.”

At this juncture, there is no denying the fact that the element of politics of deprivation played out ahead of the last gubernatorial election in Edo State but the governor of Delta State, Arthur Ifeanyi Okowa came to the rescue of Igbanke people as he attracted NDDC Project to the community. As gathered, the governor who shares the same linguistic background with the people of Igbanke, and who after leaving the National Youth Service Corps (NYSC), worked with the then Bendel State Hospitals Management Board as a Medical Officer, and went ahead to enter private practice as Director, Victory Medical Centre, Igbanke in 1986 did not forget his own people despite the geographical demarcation between Edo and Delta.

Ostensibly due to the linguistic and matrimonial affinity he have with the Igbanke people, the governor was touched by their cries over infrastructural underdevelopment, and therefore in his response attracted the reconstruction of a 4.5 km road project to Oligie-Igbanke in Orhionmwon Local Government Area of Edo State. Prior to Okowa’s magnanimous disposition towards the people of Igbanke, the road stretch received equal attention during the respective tenure of Late Governor Samuel Ogbemudia and former Governor Adams Oshiomole.

In as much as it was also gathered that a delegation from Igbanke had visited and pleaded with the governor whose wife is from Igbanke, born to Mr. and Mrs. Erasmus Mekwuye, and started her public sector career as a classroom teacher at Igbanke Mixed Secondary School, it is crystal clear that the governor’s sense of belonging with Igbanke people was not in any way a political misnomer.

It would be recalled that since this writer began to see the pitiable situation of Igbanke in terms of infrastructural development that not few indigenes of the Community who are in diaspora across various cities and towns have been extending their voices to his call on Edo State government to intervene on the fast decaying state of infrastructures in the communities that made up Igbanke. The decayinginfrastructures cut across Igbanke General Hospital, andvirtually all the primary and secondary schools established by the state government, particularly during the tenure of Dr. Osaigbovo Ogbemudia as the then military governor of the now defunct Midwestern state.

As it is, the government has unarguably jettisoned its responsibilities to some associations formed by Igbanke indigenes in diaspora. Some of the associations cut across Igbanke Unity Forum (IUF), Igbanke National Union (INU) based in USA, Igbanke National Progressives Association (INPA) and Igbanke General Union among others, and they have been coming together for common purpose to promote the infrastructural development of Igbanke community.

There is no denying the fact that the situation Igbanke for years being under has gotten to at the point where the people have to resort to telling everyone, ministry, departments and association that the community should be helped. The situation was aptly captured in an address delivered by Engr. Usiagwu Arthur Osaretin, President, Igbanke General Union Worldwide on the occasion of IGU 2020 Conference on the 28th day of November, 2020.

He said, “A prolific writer, T.F. Hodge in his book, “From Within I Rise…” once declared that: When individuals and communities do not govern self, they risk being ruled by external forces that care less about the well-being of the village. We are coming from a setting where our land and people have largely been side-lined and crassly abandoned in the service-delivery and developmental pursuits of successive governments, leaving us the only option to seek and pursue a focused programme of taking bold initiatives to move our community to an enviable height within the limit of our capacities. This informed the resolve of this gathering on the occasion of the 2019 Annual Conference that our sweet-home land of Igbanke shall be and remain the fulcrum and epicentre of our developmental thoughts and drive as individuals, affiliate bodies and the umbrella body of IGU”.

On this note, permit me to ask, “How long will NDDC continue to neglect infrastructural decay in Igbanke?” There is no denying the fact that the rationale for this writer to title this piece this way may raise eyebrow. The reason for the title cannot be farfetched as good leadership demands that the commission go beyond laid down boundaries to find out why some communities are facing infrastructural challenges. The onus lies in the fact that some governors may out of politics not be telling NDDC about the true state of infrastructure in such communities that fall within the purview of NDDC, especially as they may deliberately refused to draw the attention of the commission to the decaying state of infrastructures in such communities that fall within their gubernatorial constituency.