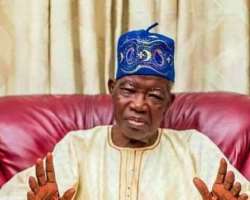 The former Minister of Works passed on Thursday morning in Lagos at the age of 91.

He was a former journalist who became governor of Lagos State in Nigeria from 1979 to 1983, and later was Minister of Works under the Sani Abacha military regime (1993–98).