Celebraging Heroism, Diligence And Resilience: The Rare Qualities That Marked The Successful Tenure Of Angela Merkel 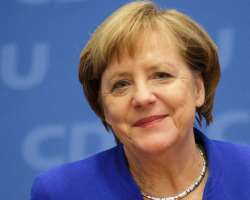 In the later part of this year, Angela Merkel one of the world's most wonderful female leaders and post powerful in Europe will vacate her space giving room for another personality to occupy it. Her tenure is such that has affirmed that leadership is not about the inner of followers one has, but the number of impacts one is able to make. This piece intends to do a review of her profiles and what she was able to make out of her tenure as the Chancellor of Germany.

Angela Dorothea Merkel (Nee Kasner) who didn't have the privilege to be conceived with a silver spoon was born to Horst Kasner who was a moving missionary and Herlind Kasner who was a teacher in one of the schools located in the hinterlands in July 17, 1954.

In what is to be described as an astute display of prodigy, Angela excelled in both her college and high school studies. This earned her the privilege of becoming too of her class having decided to study mathematics and language studies (Russian) in her university days. She rose through the ranks to bag a doctorate degree in chemistry specialising in quantum and analytical chemistry and also separation analysis. These was at the Karl Max University, Germany.

Having reached the pinnacle of her academic journey, she began her career at the prestigious Science academy. Her journey at the academy afforded her the opportunity of meeting her husband. This meeting later resulted into betrothal.

The Berlin crisis of the late 80s to the early 90s gave her much insight, courage and motivation to opt in for politics. This gave her the singular privilege of being elected into the national parliament. The experience she gained here coupled with her flair for integrity allowed her to be appointed as a minister with several portfolios before her subsequent election as Chancellor in 2005.

At a time where the role of women was highly relegated and where many nations of the world were suffering from mediocre leadership which was the bane of their development, Merkel never seeemd to be deterred as she from her cradle had lofty dreams of liberating her people from what she called the slavery of leadership. No doubt, she stood for what was right not minding the consequences. This gave her the appellation "the Iron Woman of Berlin".

The impact she had on the German economy are such that cannot be highlighted on the pages of paper. She had the stint achievement of stabilising the nation's political processes. This made Germany the envy of other countries of the world.

Economically, she was a firm believer in the gospel of making maximal use of scaarce resources for the benefit of all. Though, this was criticised as many saw her as being a miser, she however wasn't deterred by all these as what was prime in her mind was making life comfortable for the average German. Her style of adminstration was such that put the interest of the nationat heart above personal or ethnic interest. She raised the GDP of the nation significantly. This attracted the attention of foreign investments who pumped their money into the nation's economy.

She made several efforts to reduce the taxes on the poor and increased the retirement age of workers to allow for longer life span economically. This increased self-reliance and reduced the burden of expenses on the government.

With respect to power generation, Angela Mekrel established several initiatives which provided cleaner electricity and energy use for Germans,. To avert the occurrence of what happened in Hiroshima and Nagasaki during the world war,

Merkel ensured that issues bordering around nuclear weaponry inter alia weren't toiled with. In her words, she noted that the safety of Germans and Germany was her priority. Her inability to achieve this would be a blow on her personality.

In the area of defence and national security, Mekrel boosted the morale of the national amred force through trainings and increase in salaries. This has made the German army to be involved in many missions to bring peace to war torn countries both within and outside the European continent.

On the International scene, Merkel has been able to work with other leaders of the European Union towards addressing the common challenges of climate change, political incongruence among others. This has put the EU on a forward lane. She was able to use the power of diplomacy to avoid conflicts with Russia, China and other world powers.

Both the young and the old will not be quick to forget her heroic deeds. Even though she had some personality pitfalls, yet, her ability to manage both her home and the nation efficiently earned her the admiration of all and sundry. This is the profile of Angela Merkel whose 16-year tenure as the German Chancellor was modeled after equity, justice and fairness.

Her profiles should be a wake-up call to leaders around the world that leadership should be example and should not be an avenue for revenge, retaliation and bickering.

As the German elections is scheduled to hold in September, the general clamour on the lips of Germans is

Who will toe her line in sustaining the legacies she has established?