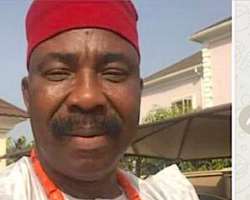 Character is like smoke: it cannot be covered up forever.

His name, Dennis Aduba, 63 years old, loved by his people, philanthropist and American based insurance Marchant. He was a father, a grandfather, a brother, an uncle, and he’s gone and no matter of sorry, empathy or sympathy and all the stories cannot comfort the widow, cannot comfort his two sons, brothers and sisters.

So the first narrative was that he was kidnapped alongside his kinsmen on his way back to catch a flight back to his US base. He was shot by the kidnappers because he was exhausted and slowing them down. Some 48 hours plus his co-travellers were released, ransom was paid, cops mounted a headhunt, got hold of his body and arrested some suspects at a camp of the kidnappers in the Bush.

Nigerians aware of the whole drama had first blamed the ‘Fulani herdsmen’. One which I was quick to fault the narrative given the amount of information I had from several open and close sources. However before I continue this article of reality and call for action by our leaders and need for restoration of security and more, cautiously follow me.

So I listened intently to the Commissioner of Police in Edo State, Mr. Philip Gbadu disclose that the Police did not notice any bullet wound on the body of Aduba.

Since the news of his kidnap broke, there have been different versions of the story especially circumstances surrounding his death. The close story being that of hiskinsmen who were abducted together with him saying he was shot becomes a plausible reason to make his relatives suspects. A lot of Robin Hood stories…

It is at this junction that I take a detour, in the last six months, these are the words, masked men, gunmen, bandits, cultists, herdsmen, robbers, marauders, foreign killers, commanders and more...countless Nigerians have paid the ultimate price to the Robin Hoods of the time

The narrative is so simplistic, car, bus, vehicle stopped, passengers carted away like goods, calls made to their loved ones, money exchanges hands and in cases even the marauders give their victims stipends from the ransom. Every victim blames an ethnic group.

In the ensuing narrative, the police storms, thunders the forest, picks a few funny looking persons of diverse backgrounds, display them with any trial and label them the killers, we see all makes of guns, rounds of bullets, and you wonder where the millions of ransom they collect in the bushes are kept or what they are used for.

A quick trip to Wikipedia is important as I did into my conversation with us, some nine years ago a certain Gyang Dalyop Dantong a medical doctor and Nigerian senator who represented the People's Democratic Party (PDP) in Plateau State was killed. He became a member of the Nigerian Senate in 2007. He previously served as a Honourable Member in the House of Representatives representing Barkin-Ladi/Riyom Federal Constituency from 2003 to 2007. Dantong died on 8 July 2012 when attending a mass funeral of people who had been killed by Fulani herdsmen in Matse area of Riyom local government in Plateau State. The people at the funeral were attacked by gunmen thought to also be Fulani.

No one has been convicted, there’s no one in jail awaiting trial for the murder or killing. We are still where we are, ethnicizing crime, and stuck where we are. No one is ever responsible, we hear the same story, the killings are condemned, we hear that we will get to the bottom of it, we remain perpetually on top.

Where’s Wadume, the ‘Taraba’millionaire kidnap kingpin that was well fortified by soldiers who always provided logistics and allied matters. After all the drama and noise, the re-arresting, and the dead cops. Nothing has changed! The Army is and has remained mute, the police who’s men were killed are equally mute, and it’s our way.

In the last one year there has been several forays into the forest by men of the armed forces, even with airstrikes, several arrests made but yet really there has been no headway. My Fulani family have become a target, and easy prey, across the divide of the Niger the cries and wails are that of, destruction of farmlands, and rape and violation of women and those that we elected, those that are responsible choose to remain irresponsible.

So, I dare ask, if El-Rufai, Tinubu, Amaechi, Godswill, Rochas, or Buhari's family were abducted would we still be dancing the naked Robin Hood music, would we be debating regarding how they were kidnap, or on whose land and farm they were picked from, countless narratives while citizens are killed.

I once asked during the height of the Chibok girls, that if two Americans, or Britons were missing in Taliban controlled Afghanistan, what do we think would have happened, and since then, even more girls have been taken hostage, Leah has remained in their custody, and so also have the Americans answered appropriately when a lad was abducted and brought in to Nigerian space from Niger Republic.

Only in Nigeria, do we point fingers at each other about the morality of right and wrong when discussing Mazi Nnamdi Kanu or the new kid on the bloc Sunday Igboho, a man that has even risen to daring the Ooni of Ife. Both men and more metamorphosing as a result of the failure of systems that ordinarily should be doing the jobs, these separatists preachers are riding on to ‘famedom’.

So, let me end with this tale about Robin Hood. Robin Hood is a legendary heroic outlaw originally depicted in English folklore and subsequently featured in literature and film. According to legend, he was a highly skilled archer and swordsman.. In some versions of the legend, he is depicted as being of noble birth, and in modern retellings he is sometimes depicted as having fought in the Crusades before returning to England to find his lands taken by the Sheriff. In the oldest known versions, he is instead a member of the yeoman class. Traditionally depicted dressed in Lincoln green, he is said to have robbed from the rich and given to the poor.

Through retellings, additions, and variations, a body of familiar characters associated with Robin Hood has been created. These include his lover, Maid Marian, his band of outlaws, the Merry Men, and his chief opponent, the Sheriff of Nottingham. There have been numerous variations and adaptations of the story over the subsequent years, and the story continues to be widely represented in literature, film, and television. Robin Hood is considered one of the best-known tales of English folklore.

The historicity of Robin Hood is not proven and has been debated for centuries. There are numerous references to historical figures with similar names that have been proposed as possible evidence of his existence, some dating back to the late 13th century. At least eight plausible origins to the story have been mooted by historians and folklorists, including suggestions that "Robin Hood" was a stock alias used by or in reference to bandits.

Nigeria is full of different Robin Hood narratives, bandits, political class, and their allies, loads of variations, and versions, depending on who is telling the story and who is listening. Soon the story would not be funny, and that is for those that either thought it was funny or did not take it serious, it would consume many of them that had the power to do something differently, a governor would soon be abducted, senators would be kidnapped, a minister may be killed, someone will soon do us a us a Robin Hood, and it is only a matter of time.