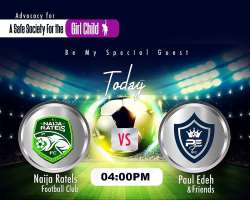 Under the theme 'Kick Out Gender Based Violence' , the Area 3 Football Pitch Abuja will play host to the first Naija Ratels FC Novelty/Charity Match at 3pm on Saturday, the 6th of February 2021.

The President of Naija Ratels Football Club, Barrister Paul Edeh and his friends will play against the players of Naija Ratels FC to raise awareness for women who are going through Gender based violence, which is in tandem with the theme of this year's event.

Barrister Paul Edeh in his words made the club's stance and it's aim clear. The legal luminary stated that the match is primarily to create awareness against any form of violence towards the girlchild, nothing that any form of violence against women and girls is a direct violation of human rights.

"I want to assure every violated woman and girl through this campaign that we are all with you.

"We condemn every act of violence against females and enjoin everyone to give full support to them.

"For those of us in Football, we respect the responsibility we have and also aware of our ability to contribute to a better world through this novelty game." The UN Peace Ambassador concluded.