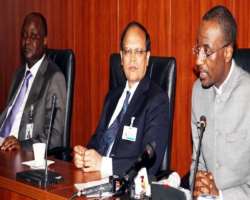 
ABUJA, July 05, (THEWILL) - The manufacturing sector of the Nigerian economy today received a boost as the Central Bank of Nigeria has planned to inject the sum of N150 billion to some 150 entrepreneurs and existing industries to turn around their operations. Each enterprise will receive N1 billion each.

THEWILL recalls that part of N500 billion infrastructural revival fund packaged late last year for power and other infrastructure revival in the country was the magic and the facility will carry a 15 year tenure with an interest of 7 percent.

Mallam Sanusi Lamido Sanusi, CBN’s boss who dropped the happy hint today said plans were underway for the signing of pact with banks that would be used for the release of the money in theã€€next seven days.

Sanusi who spoke to newsmen atã€€end of the Monetary Policy Committee (MPC) meeting said the monetary policy rate (MPR) now stands at 6 per cent, including the provisions that banksã€€are allowed in the management of their interest rates.

Sanusi also said in respect of the manufacturing sector releases: " We have concluded arrangement to release the sum of N150 billion to some 150 companies in the manufacturing sector in the first tranche release of the infrastructure fund. We will be signing agreements with banks that will be disbursing the credit next week. Each of the companies is to get N1 billion each. Unfortunately, we are yet to receive bids for companies in the power sector. And this is due to the delay in the power sector reform that is on – going.’’

He announced the country’s current Gross external reserves put at US$37.63 billion as at 23rd June, 2010 stating that the amount is a decrease of US$1.19 billion or 3.06 per cent when juxtaposed with the level of US$38.82 billion as at end of May this year.

He reasoned that the drop from the reserves level which topped over $60 billion in 2008, was as a result of the huge sum of more thanã€€ $25 billion oil revenue lost between late 2008 and 2009, resulting from failing oil prices and activities of Niger Delta militants. The current reserves, according to Sanusi wasã€€adequate to finance 16 months of import, compared to the internationally recommended benchmark of 3 months of import cover for a country’s external reserves.

"Against the backdrop of the foregoing, the MPC noted with satisfaction the continued Macroeconomic stability. It, however, stressed the need to grow the real sector on a sustainable basis. It also reiterated the possible inflation risks highlighted at the last MPC meeting, in the light of the anticipated budget deficit and the operationalization of the proposed Asset Management Corporation. However, monetary aggregates are still underperforming and the Asset Management Corporation is yet to take-off. On balance, therefore, the inflation threat remained subdued in the short to medium term. In addition, some of the approved quantitative easing measures are yet to be completely implemented."

"The Committee, therefore, considered it appropriate to continue to monitor developments with a view to intervening as the need arises. In the light of the above, the Committee decided that: No changes are made to the current policy stance viz: the MPR should remain unchanged at 6.0 per cent; and. The asymmetric corridor of 200 basis points above and 500 basis points below the MPR, respectively, are to be retained", he said.

"The Committee observed that the impressive output growth recorded in 2009 continued in 2010. Provisional data from the National Bureau of Statistics (NBS) indicates that real Gross Domestic Product (GDP) grew by 7.23 per cent in the first quarter of 2010 up from 4.50 per cent recorded in the first quarter of 2009. GDP was projected to grow by 7.68, 7.76 and 8.13 percent in the second, third and fourth quarters of 2010, respectively.

Overall GDP growth for 2010 is projected at 7.74 per cent which is higher than the revised figure of 6.66 per cent recorded in 2009. The non-oil sector is expected to remain the main driver of overall growth, with agriculture, wholesale and retail trade, and services contributing 2.49, 2.03 and 2.11 percent, respectively.

"The Committee believes that the impressive growth forecasts reflected prospects for moderate rainfall in 2010, which is expected to support the production of major crops across the country, coupled with the current peace in the Niger-Delta, which has led to an increase in crude oil and natural gas production. It, however, cautioned that there is a thick cloud hanging over commodity producing countries because of the current crisis facing the Euro Area and emerging slowdown in manufacturing in major Asian countries and the US as indicated above.

"In addition, the Committee highlighted the binding constraints on the domestic economy namely; infrastructure inadequacy, lack of access to finance, lack of requisite skills, unfavorable trade policy and a poor investment climate all of which have the potential to constrain economic growth. The MPC, therefore, stressed the need for government to pursue macroeconomic, structural and institutional reforms that appear to have slowed down in the past few years," he said.