Open Letter To Bola Tinubu And Other Yoruba Leaders (2) 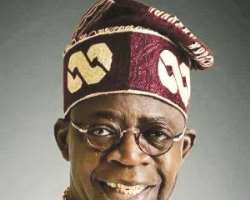 Statement by Yoruba Referendum Committee
(1) What we have just experienced in Oyo and Ondo states, once again reiterates the necessity to re-examine our overall approach to questions around “Insecurity” in such a manner that a holistic resolution would be advanced. The Yoruba Referendum Committee had earlier raised the matter in our first “Open Letter”, which can be read here, in case you missed it:(https://mailchi.mp/b8f203fa65e1/open-letter-to-bola-ahmed-tinubuandother-yoruba-leaders).

(2) All the issues around “insecurity” arise from the denial of the “NATIONAL QUESTION”, as is being witnessed through the aggravating existential reality of the Yoruba and other Nationalities in the country, with pastoralism, an Ethno-National economic paradigm mainly among the Fulani Nationality, who, with the acquiescence of the various military and civilian Administrations seek to impose this economic paradigm and force it as the incontestable reality for the Peoples of Nigeria.

(3) This has engendered continuous denial of the NATIONAL QUESTION by the Nigerian Post-Colonial State, reinforcing itself with the ECOWAS Protocol on Transhumance, supposedly aimed at addressing conflicts arising from Pastoralism, but which has become the platform for imposing such an economic paradigm on the Nigerian political and economic landscape and now to be crowned by the National Assembly’s amendment of the 1999 Constitution utilizing the recommendations of both the 2014 National Conference and the APC Committee on Restructuring, both of which deny the NATIONAL QUESTION that must be answered.

(4) It must be noted that both Conferences perpetuated the false conception of who and what constitutes Nigeria’s FEDERATING or CONSTITUENT entities by superimposing a “Nigerian Superstructure” on REPRESENTATION, in that none of the Peoples of Nigeria were directly represented, as they were not able to ascertain their existential preferences, through a Nationality-specific REFERENDUM BEFORE the commencement of the Conferences as the Nigerian Post-Colonial State is assumed to be a given and not subject to a Re-Formation.

(5) This calls for a rigorous interrogation of the concepts of “CITIZENSHIP” and “INDIGENEITY”. Whereas “Citizenship” is predicated on the POLITICAL NEEDS of a Country, which also creates the conditions for its manifestation, and which may or may not change as circumstances demand, “INDIGENEITY” is a Cosmological and Cultural existence of a People which must be recognized as foundational to the State and exhibited in Country’s architecture of STATE. The neutralization of the latter in the Nigerian Political, Legal and Constitutional framework has given birth to a huge lacuna essentially translating to the negation of the Indigene’s natural right to State formation (Self-Determination), bolstered, and fostered through INJUSTICE and VIOLENCE.

(6) That absence of JUSTICE as the raison detre of all the contradictions of the Nigerian Post-Colonial State is palpable for all to see. It therefore behooves on all of you to live up to Yoruba existential necessities, following on historical antecedents and mirroring our contemporary experiences by contextualizing current events within the context of JUSTICE.

(7) Despite our not being ignorant of the fact that all of you must show fidelity to your oath of office, even as the Constitution upon which such an oath was rendered is now being subjected to a very fundamental interrogation by all the Nationalities in Nigeria, your AD HOC responses in rapid succession to the SAME problem is tantamount to elevating the symptoms over the disease; and these, for emphasis, are: (a) Establishing “Amotekun”, (b) your response to #ENDSARS and (c) your reactive approach to the current crisis as a result of the People’s resort to self-defense, all of which were aimed at providing solutions to “insecurity” that has become a clear and present danger to Yoruba Existentialism.

(8) It is therefore noticeably clear that the resolution of “insecurity” demands the ability to dispense JUSTICE, of which the Nigerian Post-Colonial State is found wanting, mainly due to the non-recognition of INDIGENEITY as the foundation of State, and which none of the AD HOC options addressed; for, it is now crystal clear that any security paradigm of the Nigerian Post-Colonial State upon which the much-touted “State Police” or “devolution of power” will rest cannot lead to JUSTICE, either in terms of juridical infrastructure or the inherent right of a People to exercise their existential prerogatives.

(9) It is said that human beings make history, but not in circumstances of their own choosing. Such history-making is thrust upon them, within the context of their existential necessities and it is up to them to take up the mantle or lose it.

(10) Losing it, for the Yoruba Nation, under your watch, will have historical consequences almost at the level of the Trans-Atlantic Slave Trade which led to the collapse of the Oyo Empire and its repercussions on Yoruba People, the consequences of which are still with us, today.

(11) Therefore, the YORUBA REFERENDUM COMMITTEE, is calling on you to rise to the occasion, for the beckoning has opened the pathway for its manifestation; despite the limitations imposed on you by the Nigerian Post-Colonial State.

(12) The YORUBA REFERENDUM is the ANSWER to the AD HOC conundrum while simultaneously LEGITIMIZING INDIGENEITY as fundamental to the resolution of the Nigerian Constitutional crisis thereby enabling you to play your part in history.

(13) As you may be aware, the Nigerian Post-Colonial State is in no way foundationally affected by your AD HOC approaches, as it has always found ways to neutralize such AD HOC efforts, as was experienced during the hey-days of the Niger Delta Emancipation and Self-determination struggles which, under the Jonathan Administration, monetized the entire quest and without achieving ANY of its stated goals.

(15) The question begging for an answer is this: whether all of you, as the YORUBA POLITICAL ESTABLISHMENT, can present the ALTERNATIVE to the Post-Colonial State, more so when serially confronted with Yoruba Existential issues OR whether all of you will repeat history by presenting yourselves as the next best thing to happen to the Nigerian Post-Colonial State and with the expected consequences, to wit: the TRAGEDY of our recent past simply becoming the FARCE of today.

(16) The answer to this question is in EMBRACING the following as the new template for a RESTRUCTURED NIGERIA: A Federal Nigeria, through a valid Federal Constitution, to be known as The Union of Nigerian Constituent Nationalities, with a Federal Presidential Council, whose members will be selected or elected from each of the Nationalities as Federating Units and from whom a Head of State will be selected or elected as the primus-inter-pares with an agreed term.”

(17) The route towards achieving it is for each Nationality to organize a REFERENDUM within itself as to its desirability or otherwise.

(18) The YORUBA REFERENDUM COMMITTEE says not only are you all CONSTITUTIONALLY EMPOWERED to carry out the YORUBA REFERENDUM by both the circumstances of the 1999 Constitution as well as International Law and Conventions but also as a HISTORICAL, MORAL and POLITICAL responsibility and necessity.

The Yoruba Nation is eagerly awaiting your response.

Thank you and God Bless the Global Yoruba Nation