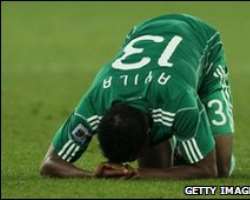 Nigerian President Goodluck Jonathan has overturned his decision to ban the national football team for two years after their poor World Cup campaign.

The president lifted the ban after the Nigerian Football Federation promised to disband and rebuild the side.

The news came shortly before a 1700 BST deadline set by football's world governing body Fifa was set to pass.

Fifa had said that it would expel Nigeria from world football if the government was seen to be interfering.

The presidency said in a statement: “The NFF assured the president of their commitment to evolving an enduring football development programme, and grow a new senior national team that will bring glory rather than consistent embarrassment to Nigeria on the world stage.

“Based on these assurances, and the appeals of well-meaning Nigerians, including former leaders, President Jonathan has decided to review the earlier two-year ban on the country from all international football competitions.”

Last week President Jonathan said that after the team's unsuccessful World Cup campaign they would be banned for two years.

On Sunday, the the NFF's top two officials were sacked in a bid to appease the president.

A source told the BBC that the sackings had not swayed the president's decision, but that the NFF had requested to meet with the president on Monday to hold emergency talks ahead of Fifa's deadline.

President Jonathan had said that the ban was necessary to “enable the country to put its house in order”.