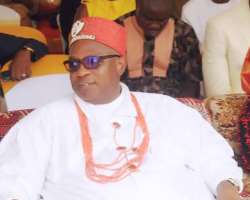 The great philosopher, Arthur Schopenhauer, once remarked that “the man who comes into the world with the notion that he is really going to instruct it in matters of the highest importance, may thank his stars if he escapes with a whole skin.” The traditional rulers in African, in Igboland and Imo State in particular fall into this category of matters of the highest importance. Instructing them in manners of tolling invokes wraths from their lands unto the defiler’s individual and family lives. No matter the aberrations made on the institution by successive State Governors in the South East and Imo specifically, once made Ezes, traditional rulers belong to the realm of the taboos in the land that must not be tampered with.

One of the effects of colonisation in Igboland that thwarted the status of Traditional Rulers is the introduction of warrant chiefs, which made liaison between the Traditional Rulers or Paramount Chiefs and the people. By dint of liaising the federated clans and lineages in Igboland in the warrant chiefs’ roles, most ancestral monarchical clans lost their customary roles. And in loosing this, clever and more organised customary communities and kingdoms sort to have their paramount rulers recognised then by the government of the day. Many conglomerate or federated clans that formed communities opted too for separation, and thus kingdoms multiplied.

Kingdoms were divided not for the reasons of development but as model for undermining the influence that Traditional Rulers from larger kingdoms enjoy, as Igbos say that “gidigid bu ugwu Eze”. One of such nascent wicked creations was the split of the ancestral Kingdom that the legend Majesty, Eze Damanze ruled. The split was nothing but for political reasons. Others were created as take away gifts to political plinths whose relations have one type of cordial affinity with the then Imo State Governor as means of settling them.

The Igbo man has respect for traditional institution particularly those that have ancient or primordial standing with the ancestors. As a scholar who did his second PhD at the department of Religious and Cultural Studies Imo State University whose Doctoral thesis is on ‘Symbols in Igbo Traditional Religion…’, I discovered that some Ezes in Igbo land are recognized not just for political reasons but for profound ancestral background linked to the historical foundation of such community.

Such traditional ruler, his words, status and advice are channels of justice, love and peace, thus projects a standard by which a society can be sustained. Governments come and go but such traditional institution remains the same. I am saying this because the duty we owe to history is to write it. Yes, history is philosophy from example. Oh yes, for Chief Rochas to have suspended some traditional rulers during his tenure was a misnomer occasioned by ignorance of Igbo traditional values. He did it with impunity and we all can recall how the gods in Igbo land handled his matter.

Aristotle says, “We are what we repeatedly do”. The APC government of Rochas desecrated our traditional institution and I do hope and pray that the present APC government led by Sen. Hope Uzodinma will bring back our traditional values by in the first place reinstating Eze Cletus Ilomuanya as the Chairman Imo State Council of Traditional Rulers. If Chief Hope Uzodinma does this, he would have faulted Aristotle in his thought that “we are what we repeatedly do.”

Today, history is repeating itself. In the words of T.S Eliot, “The historical sense involves a perception, not only the pastness of the past, but of its presence.” Socrates is quoted to have said, “Four things belong to a judge, to hear courteously, to answer wisely, to consider soberly and to decide impartially”. Justice is truth in action. For a Royal Father to have been treated unjustly is a taboo in Igbo land.

Eze Cletus Ilomuanya was unfairly treated by both Rochas and Emeka Ihedioha. Now that Gov. Hope is the hope of Imo, hope against injustice, hope for a better Imo, hope to restore our lost traditional values and dignity, I have no doubt that he will act according to the demands of justice. Gov. Uzodinma became governor through the apex court of this nation and Eze Cletus Ilomuanya got judgment for reinstatement via the same apex court which Rochas and Ihedioha ignored; our most revered Distinguished Senator Hope Uzodinma should do the needful without thinking twice.

I think His Excellency Governor Hope is a ‘good listener.’ He however must reflect on the dialectics between sacredness and respect if he is still to keep the esteem respect and love that Imolites have for him. Eze Cletus Ilomuanya is the people’s choice and the people’s choice and wish are sacred. Traditional institutions are the exerting spheres of the immaterial aspects of our culture, which are sacred too. It is a sacrilege to remove the Crown on a King’s head; Eze Cletus was humiliated for doing the right thing. He deserves to be reinstated in accordance with the rule of law.

It will be oppressive and sacrilegious to refuse these traditional rulers their heart-felt desires. Our governor should act now in the right direction!