No Chibok girl in our custody: Chief of Defence Staff 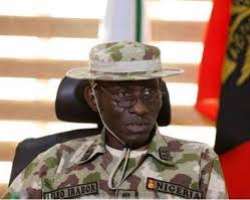 Major General Irabor who on Sunday led other Service Chiefs on an operational visit to the Headquarters, Command and 2 Centre of Operation Lafiya Dole in Maiduguri, the Borno State Capital, told newsmen that contrary to claims making the rounds, there are no new set of escaped Chibok girls in the army's custody.

The CDS, however, said “we desire that the rest of the Chibok girls receive their liberty and if our operations have helped these ones to escape, if it yielded such results, then we are glad. ”

The Military Chief said more is being done to strengthen the efforts of the army, with the hope that they will yield desired results. Daring escapes

On April 14, 2014, Boko Haram gunmen seize 276 girls aged between 12 and 17 from the Government Girls Secondary School in the remote town of Chibok in Borno state.

The girls were forced from their dormitories onto trucks and driven into the bush.

Fifty-seven managed to flee in a daring escape.
Since the attack in 2014, Boko Haram has continued to kidnap and lay claims to the kidnapping of several girls and women within the region.

While some girls were rescued by troops in 2016, others have reportedly escaped over the years, with the latest report coming barely two days before the service chiefs' operational visit to Borno.

Though it is not yet clear how many of the remaining missing girls have managed to escape, reports, however, suggest that some more girls escaped and have been reunited with their families.

The military says it is not aware of any escape and have no girls in their custody, but hopes that the operations being carried out at the moment will see that more Nigerians within the den of the insurgents will regain their freedom. Channels Tv