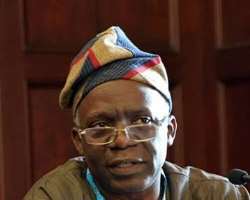 Human rights lawyer, Femi Falana, has said it is illegal for the regime of the President, Major General Muhammadu Buhari (retd.), not to license the South-West Security Network Agency, also known as Amotekun, to bear arms.

Falana, who spoke on a PUNCH Online interview programme, The Roundtable, on Friday, argued that if a private citizen can apply for a licence to bear arms for self-defence, the Amotekun Corps are also entitled to the same benefit.

He tasked the state governors in the region to approach the authorities in Abuja for the Amotekun operatives to bear arms to effectively tackle the myriad of security challenges ranging from kidnapping, banditry to rape, among other challenges, confronting the South-West region in recent times.

The overwhelming insecurity in the region had forced the six governors of the South-West to inaugurate the security outfit to tackle peculiar security threats in the region. The Amotekun Corps had also got the constitutional backing of the six state assemblies in the region.

Ondo, Ogun, Oyo and Ekiti states have since kick-started the operations of the security outfit endorsed by the governments of the six South-West states last year. Falana however said it was suicidal for the operatives of Amotekun to carry on without bearing arms because the criminal elements they were to confront use sophisticated weapons.

The senior advocate said, “You set up a security outfit like the Amotekun Corps without arms and ammunition. You are either risking the lives of the men and women in that organisation or you are giving people a false sense of security.

“I have advised our governors to apply for licences for those young men and women to bear arms. My argument is this: if an individual can apply for licence to bear arms to defend himself and his family members, it is illegal not to give licences to about 5,000 or 10,000 young men and women to protect a state like Lagos of about 20 million. And if they refuse to give the licences, we must go to court and accuse the authorities in Abuja of endangering the lives of people in Lagos. We must get to that level.

Buhari, presidency defending herders
The human rights advocate also said the government had failed the people, urging the citizenry to mobilise to make the government alive to its responsibility of protecting lives and property.

“It has got to that stage when every community has to organise its security because we can no longer depend on the government,” he said.

He further accused the Buhari regime and the Presidency of defending criminal elements among the nomadic Fulani herdsmen scattered all over the country.

Oyo and Ondo states have been in the eye of the storm lately over security challenges and the moves to check the activities of killer herdsmen.

A popular Yoruba rights activist, Sunday Adeyemo, well known as Sunday Igboho, had issued a seven-day notice to quit to herdsmen accused of crimes in the Ibarapa area of Oyo and enforced same.