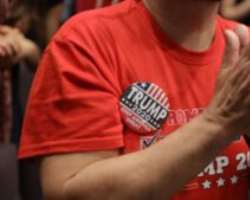 Kris Vallotton prophesied to all who would listen that God had told him Donald Trump would win re-election. As a senior associate minister at California's 11,000-member Bethel Church, a swarm of eager believers received the pastor's prophecy as God's unshakeable will.

“This is not about politics. I'm so sorry if it feels that way. I know how it could. Everybody in the front row knows me. It's not about politics. If the Lord gave me this word about President Obama I would stand here and give it and I have done so before. This decree, the Lord is gonna step in sovereignly. He's gonna bring it to a close. And it's gonna be ugly but it's gonna be the Lord,” Vallotton said in November of 2019 , as Trump faced his impeachment trial. “And I believe the Lord's gonna give him another term. I believe it because… the Lord wants it. 'Cause the Lord wants it,” he went on, explaining that “I am commissioned by God to do this today. I had three dreams in one night.”

Vallotton was far from the only Christian leader claiming before the election that the Almighty had rigged the outcome. J. Gordon Melton, religion professor at Baylor University and compiler of the respected Encyclopedia of American Religions , counted at least 40 influential Christian prophets who foretold a Trump triumph. These prominent figures were joined by a cottage industry of lesser-known voices whose online declarations about Trump's impending triumph were viewed and shared millions of times.

In the Christian tradition, prophets are something like God's carrier pigeons. They receive messages directly from the Divine and are then tasked with relaying those messages to the world without alteration. The Bible is stacked with stories of revered prophets—such as Elijah, Isaiah, and Jeremiah—who risked life and limb to deliver holy writ to God's people. And there's a label for those who wrongly predict the future in God's name: false prophets.

In the Bible, there's a simple one-strike-and-you're-out test for sorting out the counterfeits: “You may say to yourselves, 'How can we know when a message has not been spoken by the Lord?' If what a prophet proclaims in the name of the Lord does not take place or come true, that is a message the Lord has not spoken.”

That's an unforgiving standard, but I didn't make the rules, which allow for no mulligans, no gimmes, no grace period, no excuses, no wiggle room, and no appeals process. If a single prediction failed to come true, the one who spoke it was a fraud. The bar was set high to protect God's people against abusive religious leaders.

As archaic as it may sound to the non-religious ear, there are many Christians in 21st century America who believe in prophetic gifts, and a good number of false prophets delivering God's word to them. Pentecostalism, of which the prophetic movement is a part, is one of the fastest-growing streams of Christianity in the world. Its leaders include megachurch pastors, syndicated radio hosts, denominational heads, college presidents, televangelists, popular authors, Instagram influencers, and during the last four years, spiritual advisers to the president of the United States himself . The most popular prophets in America effortlessly fill professional sports arenas, appear atop the New York Times bestsellers list and have millions on their mailing lists. Many are also politically outspoken, which means that they can potentially influence election outcomes.

Many Americans first became aware of the existence of Christian prophets in the wake of the 2016 election when most were left slack-jawed by Trump's surprise victory, but a handful of Christians claimed that God had told them it would happen.

These prophets weren't exactly playing the odds. Every respectable poll forecasted that Trump would get trounced in the general election by Hillary Clinton. When prophet Jorge Parrot predicted a Trump victory in 2016, for example, The New York Times was giving the Republican candidate only an 11 percent chance of winning.

News of these prophets' predictions spread quickly. Mark Taylor, a retired firefighter from Florida, famously predicted a Trump presidency five years prior. In April of 2011, he claimed he saw Trump being interviewed on television and heard God say, “You are hearing the voice of the next president.” His account of these events became the inspiration for the bestselling book “ The Trump Prophecies ” and subsequent film that was released in more than 1,000 theaters nationwide.

Stories like Taylor's and Parrot's were like catnip to the prophetic community. By 2020, dozens of Christian foretellers were declaring that God told them Trump would secure a second term.

Los Angeles megachurch pastor Shawn Bolz prophesied that Trump would win by God's hand and that the now-departed commander-in-chief would exhibit “more boldness in the second term.”

Pink-haired prophetess Kate Kerr declared via YouTube that God had transported her to heaven in order to personally tell her of Donald Trump's re-election, which she said would “make America greater than ever.” Kerr added that Mike Pence would also win two terms as president, as would Pence's future running mate.

Ninety-year-old televangelist and Christianity's crazy uncle, Pat Robertson, predictably snagged a piece of the prophetic action, too. He declared in October that God told him “without question, Trump is going to win the election.” (Robertson added that there would be assassination attempts in Trump's second term, and that the apocalypse would follow in the form of an asteroid smashing into Earth.)

In the days following the 2020 election, it became clear, even to many of his closest allies, that Trump had indeed lost. A couple of prophets acted swiftly. On Nov. 7, for example, Vallotton became the first to issue a mea culpa, telling his nearly 250,000 Instagram followers in an apology, “I take full responsibility for being wrong. There's no excuse for it.” He added , “I think it doesn't make me a false prophet, but it does actually create a credibility gap.”

Vallotton then deleted his apology, explaining that “it appears there is significant amount of discrepancy in the process,” only to repost it after the Jan. 6 attack on the Capitol. That's quite the “credibility gap.”

Others held out hope that somehow Trump would find a way to win in order to save America's future, not to mention their public reputations. Who can forget the video of televangelist Kenneth Copeland's manic laughter in mockery of those who believed Biden had actually won? Like his attempt to exhale the coronavirus into oblivion, the level of delusion was hard to comprehend.

By the time the clock struck noon on Jan. 20, the moment of reckoning had arrived. When Joe Biden was sworn in as the 46th president of the United States, these prophets' predictions became verifiably false. There was no more room for debate. At that moment, those who had uttered countless untrue predictions in God's name had become false prophets.

That was no surprise to me as someone who has closely studied American Christianity, and evangelicalism in particular. For one thing, many of these prophets aren't living in caves and deserts like their biblical forebears. Paula White and Sid Roth have estimated net worths in the millions, and Kenneth Copeland's is estimated in the hundreds of millions. Others own private jets, luxury vehicles and opulent mansions.

Today's Christian prophets' blending of religion and nationalism reminds me of the essay the late Jewish scholar Martin Buber wrote after false prophets fled Nazi Germany to teach at Hebrew University in Jerusalem:

“False prophets are not godless. They adore the god of success,” Buber wrote. Sound familiar?

“The true prophets know that little, bloated idol that goes by the name of 'success' through and through,” Buber continued, so that “when true prophets address the people, they are usually unsuccessful; everything in the people that craves success opposes them.”

In the Bible, by contrast, the Jewish prophets typically declare divine judgment, not prosperity. As H.W. Wolff noted in his respected book Confrontations with Prophets , “The false prophet… makes things easier for his listeners.”

For many modern prophets, the election was not their first miss. Pastor Shawn Bolz, for example, admits that he once told a family that a member who had been diagnosed with cancer would survive, but she died months later. Last February, he said that God had revealed to him that the end of the coronavirus pandemic was imminent. “The tide is turning now,” he declared . And let's not forget Pat Robertson, who predicted in 1976 that the world would end in 1982. And predicted in 1990 that it would end in 2007.

Yet the world is still spinning. And Robertson is still broadcasting.

Perhaps these prophets misheard God. Or perhaps God told them one thing, and then changed His mind.

Or perhaps these “prophets” told people what they wanted to hear and what they hoped would come true, even deceiving themselves in the process.

As Michael Brown, a leader in the prophetic movement since the 1990s, told Julia Duin in Religion Unplugged , “I believe many leaders looked at Trump as some kind of political messiah who would fight our battles, give the church back its voice, and on and on…. It all blended together. And we sometimes prophesy what we desire.”

And today's Christian prophets who've been able to miss and miss again without losing their power, platforms, or money-making ministries have every reason to keep hearing what's in their material interests.

The only way to protect ourselves from these false prophets is to return to the Bible's ancient standard: one failed prophecy and you're out of business

Read more at The Daily Beast.
Get our top stories in your inbox every day. Sign up now!

Daily Beast Membership: Beast Inside goes deeper on the stories that matter to you. Learn more. Originally published Wed, January 27, 2021, 4:05 AM