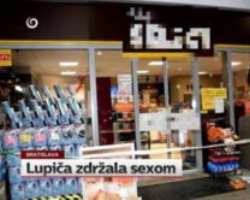 An alleged thief who was stealing from a petrol station and attacking staff with an unusual method which has left many stunned.

The alleged thief, a 24-year-old man reportedly tried to steal from the gas station on Tuesday night and threatened to kill staff, Slovakian local news reported.

As the employee opened the cash register, the suspect reportedly took the money from it and punched the staff member several times before the staff escaped through the back door to call the police.

In his attempt to steal more money from a safe, the alleged thief moved to the office and the second colleague managed to also escape.

Local media reports an unknown woman came inside within a few seconds and began to satisfy him orally until police arrived and then detained the suspect.

Police told TV JOJ, they found the couple in the office half-naked and lying on the floor, and the woman said something along the lines of “I don't take him anymore.”

Officers said the thief was taken into custody.
It's unclear why the woman believed to be 36 and of Czech nationality, decided to stop the alleged robber with an unusual method.

A suspected thief agreed to do oral sex at the scene where he went to steal? (LIB/ BR)