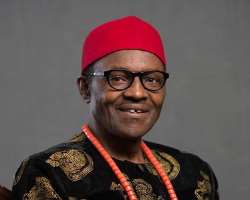 Mr President, you have done well. You are a great man by all measure. You are blessed. Before God you are great, before man you are great. Your life has been a blessing to Nigeria, through your works and brand. You have lived till a ripe old age. I wish you many more years, till 120, like I wish my father.

Devoid of righteousness, you are devoid of authority to exercise power. Your exercise of power is illegal, thus,your power is null and void. Your presidency therefore is criminal, so you must resign immediately, and handover to righteousness, who has the sole authority. He would exercise legitimate power.

I invite you to leave the legacy of your brand intact, and avoid tarnishing it any further, due to your lack of righteousness.

To everything there is a season. In good faith, Sir, the season for you to step down from power has come. The season is now. Do so with immediate effect.

Please, step down while your star shines brightest, and write your name in gold in the annals of history, for eternity. Use the remainder of your time in office this year to constitute an interim government I will head, then handover power to me, the head of the interim government, to lead that interim government, a government that will pave the way to establish righteousness as the law in Nigeria. This is important, in order to restore authority to the presidency, for at the moment, while the presidency still holds power, it lacks authority, having lost legitimacy.

There are many other reasons for this lack of authority in the presidency, and official leadership of the nation in general. The furor over the conduct of the last elections, and its outcome is a significant aspect of it.

The interim government's key objective would be to make elections credible and reliable. The primal of them pertains to absence of order. Allow order to return to the presidency, in order to restore authority to the presidency. Then exercise of power would be legitimate and credible.

When the head fails, the body fails. Our entire institution lacks legitimacy due to the absence of authority at the presidency. Order must be restored at the presidency as a matter of urgency.

Allow an interim government geared towards restoring this order to be established, and hand over power to them. Then, sit back and watch the fruits of your labour, as well as your noble legacy of power transition blossom, while you savour the same.