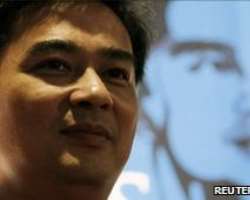 The Thai cabinet is due to consider extending the state of emergency currently in force in the capital, Bangkok, and 23 provinces.

Imposed in response to months of violent anti-government protests earlier this year, emergency rule is due to expire on Wednesday.

Security officials have recommended that it be extended.

The Prime Minister, Abhisit Vejjajiva, told the BBC that there would be a gradual lifting of emergency laws.

Within hours of Mr Abhisit's comments however, the Centre for the Resolution of Emergency Situations (Cres) said it had reached a unanimous decision to recommend to cabinet that emergency rule be extended in all the 23 provinces and the province of Bangkok, for another three months.

Military view?
The Cres is a committee comprising representatives of each branch of the armed forces, the police and government ministries; key roles in Cres are held by military nominees.

It was set up to manage the government's response to the red-shirt anti-government protests including two crackdowns which left a total of 90 people dead.

Cres spokesman Colonel Sansern Kaewkamnerd said weapons believed to have been taken by anti-government protesters had not yet been retrieved.

“So keeping the state of emergency decree is likely to help maintain security and economic stability,” he said.

“But the cabinet will make the decision,” he added.

More than 400 people have been arrested under emergency law, which has handed sweeping powers to the police and military.

A report by the International Crisis Group has called for emergency rule to be lifted, warning that the “legitimate frustrations” of the anti-government movement were “being forced underground and possibly towards illegal and violent actions”.

The report, Bridging Thailand's Deep Divide, calls for the release of all those detained, and an end to the “sweeping ban” on opposition media outlets.