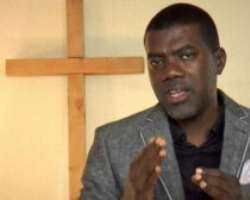 Probably the most irresponsible comment ever made about the Boko Haram tragedy that has been visited on Nigeria is that made by the incumbent Governor of Borno state, Professor Babagana Zulum, whereby he abdicated responsibility for the Boko Haram insurgency and sought to place the blame for the deadly terror group on Christians.

His exact words at the January 15, 2021, 17th Gani Fawehinmi annual lecture organised by the Nigerian Bar Association, Ikeja branch are as follows:

“They are being sponsored by many people across the world. Among Boko Haram, we have white men, Asians, Africans, Muslims and Christians.”

Without evidence, without precedence, Zulum decided to slander Christians directly. Meanwhile, the Islamic establishment has been having a hissy fit over the Christmas Day homily of Bishop Matthew Hassan Kukah that attacked Islam in no way, shape or form.

Can you imagine the deception of this oloriburuku Governor? Radical Islamists are killing Christians, and rather than being ashamed and putting his house in order, Zulum is seeking to blame Christians.

First and foremost, Zulum is a shameless liar. There are no Christians in Boko Haram, and since he who alleges must prove, then we put Governor Zulum on notice to provide the strictest proof of his outrageous lie.

And secondly, and I hate to say it, but the Northern elite are directly responsible for Boko Haram. They politicised it. We remember when on June 2, 2013, Muhammadu Buhari said that the 'military offensive against Boko Haram was anti-North'. I mean, that is the type of statement you expect from the spokesman of ISWAP.

Is it any surprise then that the Buhari administration has been pursuing a policy of rehabilitating so-called 'repentant' Boko Haram members?

My question for Zulum is this: Can he produce one Christian amongst the thousands of repentant Boko Haramists who have been 'rehabilitated' by the Buhari government?

For years, these Northern elites have fed fat on Nigeria's wealth and have refused to empower their own people through investments in education and healthcare.

Take Borno, for example. In January of 2020, I watched probably the saddest video I have ever seen in my life. It was a video on the website of The Cable, and it showed the sheer number of private jets that landed in Maiduguri on December 28, 2019, bringing guests for the wedding ceremony of the son and daughter of Kyari Mele, the Group Managing Director (GMD) of the Nigerian National Petroleum Corporation (NNPC).

I have lived in America for decades. I schooled in the United Kingdom. I travelled to over 30 countries in 2019, campaigning for #FreeLeahSharibu. Yet, I have never seen private jets converge in such profusion on one place and for one event in my life. The only possible exception is when I watched a clip on CNN of guests arriving for the World Economic Forum in Davos, but to a large extent, they arrived on commercial planes.

Sadly, on the same day that The Cable reported that 40 private jets rained out of the sky into Maiduguri, ferrying guests to the wedding Fatiha of the children of the NNPC GMD, the British press was agog with photographs of British Prime Minister, Boris Johnson, and his girlfriend, Carrie Symonds, flying economy to the Caribbean island nation of St. Lucia, to mark the New Year. Note that Boris Johnson is one of the most successful politicians on Earth right now to put this in perspective. Yet he flew Economy. The NNPC has made a ₦547 billion loss in the last three years, yet its GMD's guests flew into town with 40 private jets. And Nigeria wants to borrow $29.6 billion!

I urge my readers to note that the Nigerian National Petroleum Corporation, which this fellow heads, has consistently declared a loss for the past five years.

I again urge my readers to note that this happened at a time when Borno had almost 2 million Internally Displaced People.

It costs about $25,000 to charter a private jet from Abuja to Maiduguri. Now, multiply that by 40. That money wasted on that day could have fed a million IDPs. It could have built a thousand makeshift shelters for them.

These are their own people. Zulum was at that wedding. He was luxuriating. He failed to see that this type of wickedness of the Northern elite has led to the uprising by the masses in anti-social groupings like Boko Haram, bandits, and kidnappers.

President Muhammadu Buhari likes to be seen as the only good person in Nigeria. Still, we have not forgotten so soon how, according to Daily Trust (which also happens to be the President's favourite paper), his own daughter, Zahra Buhari, received pre-wedding gifts worth 47 million Naira from her then suitor and now husband, Ahmed Indimi.

Yet right there in Indimi's Borno state, right there in Maiduguri where their palatial family house is a sprawling tourist attraction, there are millions of Internally Displaced Persons without food to eat and medicine for their ailments. Perhaps it is this sort of wickedness that Mohammed Yusuf saw which made him conclude that Boko (book) must be Haram, if it can make people so oblivious to the suffering around them.

This same Indimi family that likes to marry and be married to Nigeria's high and mighty (President Ibrahim Babangida is also their in-law via the marriage of Mohammed Babangida, his first son, to Rahama Indimi).

It took a Christian, in Femi Otedola, to donate $14 million dollars to the Save the Children Fund that is feeding and caring for IDP and orphaned children in Nigeria's Northeast. Zulum did not remember to thank Otedola for that. But he remembered to accuse Christians of being among Boko Haram.

I was in Anambra once and the type of community spirit I saw there impressed me. They may not have a lot of private jets in Anambra, but in Anambra, they have community associations that give scholarships and business grants to those who are commercially inclined. There is absolutely NO poverty in Nnewi, one of the communities where this community spirit is most prevalent.

They build their own primary and secondary schools through community effort. I am dead serious. If you go there, you will not believe your eyes! They have well tarred modern roads that were built through their private efforts. All over Anambra, the various towns and villages copy the Nnewi model.

I daresay that there is more evidence of private and community development in Anambra than there is of any type of federal government presence. Anambra does not even have an airport! Borno does. Anambra does not even have a publicly-built federal university! The only so-called Federal University in Anambra, Nnamdi Azikiwe University, was built by the state government with contributions from private citizens and then compulsorily taken over by the military government of General Ibrahim Badamasi Babangida via Decree No. 34 of July 15, 1992. But in Borno, they have a massive federal university WHOLLY built with Federal Government funds.

Those are the types of questions that Governor Zulum should be seeking answers to, rather than trying to blame Christians for what he and the rapacious elite of his region have done to their land.

If a Christian uttered the rubbish Zulum uttered, Nigeria would be on fire. Take Kukah's Christmas message. No mention of Islam. Yet, JNI, MURIC and the Sharia Council of Nigeria want to crucify him. I believe in unity, but not unity at all cost. If we can't stay together peacefully, perhaps we should go our separate ways!

In conclusion, without mincing words, Governor Zulum is an oloriburuku. And if he does not know what that means, he can as well ask one of the Christian Boko Haram members to translate it to English for him.

Reno's Darts
Look at Garba Shehu saying herdsmen have a right to live and do their business anywhere in the country.

What type of unequal union is this? Alcohol is haram, but killing innocent Nigerians by herdsmen is not haram? We can do our own in your land, but you can't do your own in our land. We are either all equal or we all go our separate ways!