As Politicians Profess To Know God, Power Reveals They Knew Him Not 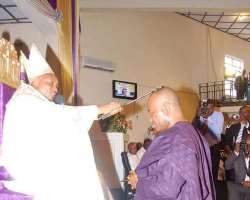 One may not be wrong to say that most politicians during electioneering campaign are wont to play religious card to earn endorsements from clergy men, and secure massive votes from voters only to eschew factoring God into the scheme of governance when they eventually get to power. To many people in the Christendom, their collective action has not in any way being unexpected as the Bible in Hosea chapter 1 verse 16 rightly says, “They profess that they know God; but in works they deny him, being abominable, and disobedient, and unto every good work reprobate”. Unfortunately, the politicians had by their sanctimonious and hypocritical actions thrown themselves into a self-destructive quagmire. This is because the more they claim to know God the more their true identities are revealed.

I must confess that there is nothing that burns me up more than politicians who hobnob with clergymen during electioneering campaign but decidedly behave in un-Christian manners when they eventually get hold to power.

Most nauseating about the acts of the politicians is their predilection to harp on the relevance of their Christian names to campaign for votes. For instance, an aspiring politicians that has been known with his native names will during electioneering campaign boldly highlight the Christian name he was never known with on his campaign poster. If I may ask, does merely bearing a Christian name makes one a Christian. Webster's Dictionary defines "Christian" as "one who follows the teachings of Jesus Christ". Though, Biblical scripture is interpreted in many different ways, most theologians would agree that the basic teachings of Jesus were simple enough for a child to understand. Love God with all your heart and soul. Love your neighbor as yourself. Love your enemies. Be merciful. Do not judge. Forgive and be forgiven.

According to an online encyclopedia, Wikipedia, “Christianity is an Abrahamic monotheistic religion based on the life and teachings of Jesus of Nazareth. Its adherents, known as Christians, believe that Jesus is the Christ, whose coming as the Messiah was prophesied in the Hebrew Bible, called the Old Testament in Christianity, and chronicled in the New Testament”.

With the way politicians run head over heels for endorsements by clergies, one would think that a politician who espouses the Christian faith would literally perform miraculously well when voted to power, if he or she would be sincere in his conviction. This collective attitude among the politicians, no doubt, has been the bane of governance in Nigeria. They feign to be Christians, thereby making the people to erroneously believe that the candidates to vote for at the polling booth only to win and begin to behave like devil’s incarnate. How long are we going to continue with this deceit that has being with us like a leech?

With my understanding of what Christianity is, and my understanding of how some of our politicians have been misgoverning and misruling when in power, I am continuously dumbfounded. To put it bluntly, the hypocrisy which our politicians have since the evolvement of democracy been exhibiting has been stalling good governance and progress of Nigeria.

According to surveys of religion in America, somewhere between a fourth and a third of Americans described themselves as “spiritual but not religious.” An average American despite his or her reservations about being churchy or religious as we are known to be in this part of the world, believes God exists.

Seeing an American politician from the perspective of the foregoing, it would be little wonder to understand the reason behind the fast spate of development in the entire 50 States in America The reason for the foregoing view cannot be pooh-poohed as America, as a nation, no doubt, has remained a trail blazer in the act of putting God first in the process of governance, and there have been tremendous evidences to show that God is truly with the country. As we all know, the motto on the national currency of America is “In God We Trust”. Given the fact that the Americans truly believe in God without feigning it, it is, therefore, not a surprise that America literarily stands like a colossus in the comity of nations.

For instance, the concluding portion of the acceptance speech delivered by the new American President, Joe Biden’s on January 20, 2021 did not ignore God’s relevance in American government as it says “That is what we owe our forbearers, one another, and generations to follow. So, with purpose and resolve we turn to the tasks of our time. Sustained by faith. Driven by conviction. And, devoted to one another and to this country we love with all our hearts. May God bless America and may God protect our troops. Thank you, America”. That God’s divine nature and His power was acknowledged by Biden in his speech cannot be countered in this context.

To my view, our politicians that occupy political positions at all levels of government in our nation should not be taking religious injunctions from the surface but should as well be internalizing and putting them into practice in the course of governance. I know most politicians respectively bear Christian and Moslem names as earlier pointed out in this piece, and that they equally attend religious services at the mosques and churches on Fridays and Sundays, but that is not enough. They should truly demonstrate to us that they are children of God at their various political positions by articulating efforts that would lead to good governance for all Nigerians. The reason for this view cannot be farfetched as they had in campaign period sought the endorsement of prophets who, in most cases, for pecuniary reasons ostensibly cook-up prophecies that would boost the confidence of the politicians.

Permit me to say that for politicians to always convince the electorates that they are truly Christians and Moslems that Love the people, they should at all times ensure they provide good roads, electricity, potable water, affordable and accessible healthcare, qualitative and quantitative education, creation of jobs for the youths and what have you for the people. This, to me, is to truly convince the people that they are not hypocritical and sanctimonious by claiming to be Christians only during electioneering campaigns.

I know, at this juncture, that this write up may have been misconstrued. Some readers may by now be thinking that this writer is advocating for theocracy as a system of government, no, it is not. The view I am expressing in this piece is not new. It is about the foolhardiness that is inherent in the attitude of a politician that flaunted religious card during his campaign only to ignore God in the process of governance.

Permit me at this juncture to say that in as much as we cannot expect our politicians, or better still political leaders to be perfect, but we must expect them to be who they say they are as they are expected to always display a high sense of integrity while in power. The reason for the expectation cannot be farfetched as Integrity is the opposite of hypocrisy.

Be that as it many, it is expected that politicians should at all times align with their character inside and out as an African proverb has it that “The man that is under the mask will sooner than later unveil his true facial look when he begins to feel the heat.” The same proverb has its parallel in an English proverb that says, “Better the world should know you as a sinner than God know you as a hypocrite”.

Permit me at this juncture to sound it loud and clear to Nigerian politicians who are wont to deceitfully grab power by pretending to be either Christians or Moslems that both religion and politics have one common goal: that is to acquire political power and use it to fulfill their aims. However, to achieve this objective, their methods are different. Religion mobilizes religious sensibilities of people in order to get their support to capture power; while politics uses intrigue, diplomacy, and makes attempt to win public opinion either democratically, if the system allows it, or usurps power through brute force, if the society is under-developed and backward.

Finally, politicians are through this piece be reminded that as they profess to know God, the power they hold on behalf of the people is by each passing day revealing that they knew Him not.