My Interim Government In Nigeria: Appeal To Americans via President Biden 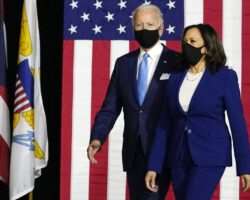 Most of the people of the world today are Americans: your culture and spirit is, without a doubt, dominant. Hence, the world has become and stayed American for decades. From coast to coast, and shores to shores, American culture resonates with young and old. Even animals, like dogs, wiggle and jiggle to the American spirit.

A culture does not exist in a vacuum, it is people's way of life. Behind American culture is Americans, colorful people whose liveliness inspires and continues to inspire the world. Americans, you have led the modern civilization to this day. You have pioneered excellence in every spheres of human endeavor. The world looks up to you for leadership in everything. Your leadership, upon prompting, and on routine, is commendable.

Because of your leadership, the world is more prosperous. With your leadership, the world is more secured and safer. With you leading, mankind has learned of their full potentials, and is set to actualize them. You, via your culture, have inspired a movement that is set to actualize mankind. You are phenomenal. I appreciate you.

You come from all walks of life, diverse races and differences in psyche due to religion and other distinct preferences, yet you have largely co-existed amicably. You have piloted your diversity to be a cause for celebration, instead of cause celebre.

When there is a need for change anywhere in the world to better the lot of a people, Americans are always at the forefront of an active campaign to achieve the goal. Regardless of the nature of sacrifices involved, Americans are always the foot soldiers. Others may just talk, which is important, but American do the work.

Let me not even mention entertainment. What's there not to like about them? From their movies, to their music, to sports, Americans keep the world entertained with colourful displays and renditions of incredible talents. Little wonder they always rake the most gold medals, and overall medals at the Olympics, a testament of their global leadership. They literally always haul in medals.

Powerful agents of change whenever it is needed to liberate any people, they were there against fascism, leading allies, in World War 2. They ushered in civil rights in their own nation, pushed and successfully ended institutionalized slavery. They are pioneers when it comes to liberation, having established their own country on that principle. They, as a people, are the best partners when pioneering new destiny for any people.

This is why I am inviting you, Americans, to join me in my quest to pioneer a new order for Nigeria, through the establishment of an interim government that will restore legitimacy to her leadership, government, and institutions.

Please, join me in asking the current president of Nigeria, Muhammadu Buhari, to accept my request to establish an interim government. Let him work with me to form this government, then hand over power to me, the head of this government, and step down from office.

Please indulge your colorful American spirit to make this plea. As always, be your cheerful polite selves while urging him to heed my quest. Your voices and actions have never been insignificant in world affairs. You have brought down mountains with your voices and actions.

Let the most powerful people on earth join me to ask Muhammadu Buhari to allow me form an interim government that will actualize Nigeria, then hand over power to me, and stand down from office.

God Bless You. May God Bless The United States Of America.