Are The Rich Importing COVID-19 To The Detriment Of Other Nigerians? 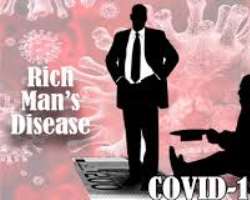 According to an African proverb, precisely an Edo proverb, “No one is without knowledge except him who ask no questions”. I must confess that I was compelled to ask the foregoing question, which is invariably the title of this piece as the rising cases of COVID-19 among remarkably rich Nigerians is becoming worrisome. So, if I have offended anyone with the scathing headline, I am in this context pleading that I should be forgiven. I could not resist asking the question as another African proverb says “The boy that has palm oil stain on his lips, and that was often seen hurriedly dashing out and dashing in from the kitchen may likely be the one that usually dips his hands into the pot of soup that everyone is stooling as a result of the sourness of the soup.”

There is no denying the fact that COVID-19 has spread in a remarkable pattern never before seen in modern human history as it seems to have majorly been targeting the remarkably rich among us. In as much as I will not in this context dispute the fact that normally, outbreaks (such as cholera) devastate low-income communities first, permit me to say that many modern pandemics, like COVID-19, is becoming startlingly common among the rich.

Without any iota of exaggeration, COVID-19 is unarguably behaving differently as it is not been fair to the rich among us. After leaving China in December 2019, the virus spread to the highest levels of society, from the U.S. Congress, Tom Hanks and NBA pros to sitting heads of state and billionaires. One of the first major clusters in Europe affected two dozen people at an upscale ski resort in France. Instead of percolating in impoverished city centers, COVID-19 hung out on expensive cruise ships. Some of the very first cases in Hong Kong did not show up in low-income urban centers, but at the Four Seasons Hotel. Paradoxically, many of the poorest countries in the world seem to be the safest.

In as much as I will eschew mentioning names in this context, it is expedient to copiously quote Premium Times Report of Tuesday, January 20, 2020 which paints a gory picture of the situation as its says that “Nigeria logged another relatively high daily death tally from COVID-19 with 15 people dying from the disease. This took the death toll in the last three days to 44.

“A total of 113,305 infections have now been reported across the nation after 1,301 new cases were found in 22 states on Tuesday.

“This is coming barely hours after the country’s National Strategic Cold Stores announced that it has secured ultra-cold freezers for storing some COVID-19 vaccines Nigeria is expecting to receive later this month.

“As Nigerians expect the vaccines and the country continues to record more coronavirus cases, the direct adverse impact has been more fatalities, data from the Nigerian Centre for Disease Control (NCDC) shows.

“On Sunday Nigeria recorded 15 deaths before reporting 14 fatalities on Monday. Last Friday, Nigeria announced its deadliest day of the pandemic with 23 lives lost.

“Last week, which is the third week of the New Year, the country recorded 70 deaths, the weekly highest in the New Year. The country also recorded 50 and 48 deaths in the first and second week of 2021 respectively.

“In the past four weeks, there have been over 200 deaths as a result of COVID-19 complications in Nigeria.

“The rise in mortally shows that the second wave of the pandemic is deadlier than the first as more patients require breathing support not just in Nigeria but globally.

It is still not an exaggeration to say that since the pandemic made its way to Nigeria from China enroute other countries across continents and then to Nigeria that not few Nigerians have been asking “What is going on here?” “What could be causing the virus’ selectivity?”

Despite the fact that no one really knows why, it may not be totally wrong to guesstimate in this context that one of the reasons could be that the inherent inequality allows the wealthy elite to get tested more quickly as his societal position has placed him on the pedestal to easily obtain access to testing in the first place. Paradoxically, low-income folks may have the disease but likely lack the wherewithal to get tested for people to know of as in the case of the rich.

In a similar vein, COVID-19 being a “social” disease found the rich more vulnerable as it spreads in large gatherings like conventions, parties and cocktail receptions, which are places frequented by those with free time and disposable income.

Finally, traveling across the globe is expensive and the rich travel frequently. Those who travel less not at all tend to have less disposable income, and lower rates of travel are directly correlated with a significantly lower risk of infection.

Aside from the interesting demographic phenomenon at play here, the vulnerability of the wealthy reveals an important fact about our society: a tiny group of people in Nigeria and around the world are wealthier than ever before. Their wealth transcends nation and state, allowing them to travel amongst countries as easily as we travel, say from Lagos to Benin among our local neighborhoods. This privilege, no doubt, has exposed them to going to places where the pandemic is more pronounced, and thereby literally importing the disease down to Nigeria to the detriment of other Nigerians. Paradoxically, the rich at the corridors of power; that is, those in governance are obsessed in implementing lockdown in churches and markets. If I may asked, “How many Pastors in the country, or Market women have contacted the virus compared to political leaders that are always travelling even at the provocation of the slightest headache?” To my view, those in government should be less hysterical about the issue of COVID-19 pandemic so that they do not cause more damage than harm. Successfully fighting the pandemic demands that efforts should be geared towards where the pandemic is coming from. It is not a disease that should be politicized.

Again, the federal government should not forget that the World Health Organization warned in 2020 that “Travellers returning from affected areas should self-monitor for symptoms for 14 days and follow national protocols of receiving countries. Some countries may require returning travelers to enter quarantine. If symptoms occur, such as fever, or cough or difficulty in breathing, travellers are advised to contact local health care providers, preferably by phone, and inform them of their symptoms and their travel history. For travellers identified at points of entry, it is recommended to follow WHO advice for the management of travellers at points of entry”.

Be that as it may, one can also guesstimate that the rich might have been spreading the disease to other Nigerians through their drivers, cooks and other domestic workers that interact with other Nigerians. On this note, I am pleading through this piece that the rich among us should help Nigerians by cautiously staying safe in this pandemic period. They should limit the rate of travelling and high class events which they are wont to attend.

At this juncture, it is expedient to ask, “Are the rich importing COVID-19 to the detriment of other Nigerians?