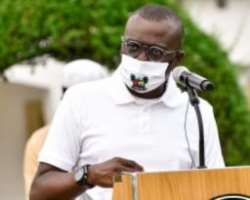 A medical official performs a throat swab on a resident of Mabushi in Nigeria's Federal Capital Territory Abuja as part of the community testing for COVID-19… on Wednesday, April 15, 2020. Photo: Sodiq Adelakun/Channels TV

The Lagos State Governor, Mr Babajide Sanwo-Olu, has urged Lagosians to consider any malaria-like symptoms experienced as COVID-19 infection unless and until proven otherwise.

The governor said this on Tuesday during a Press Conference on COVID-19 Update at the Lagos House, Ikeja, following the increase in number of recorded cases of coronavirus in the country.

He, therefore, advised that anyone with such symptoms should proceed to any of the state's public health facilities or laboratories to get tested for free, noting that “seeking help early and quickly significantly improves the chances of survival for severe to critical cases.”

Governor Sanwo-Olu also noted that it is important that residents begin to learn to live and act responsibly, in order to augment the government's efforts and previous success of flattening the curve.

According to the governor, the second wave of the virus has now necessitated the need for more oxygen plants in the country, as well as the reopening of some of the previously closed isolation centres, such as the INDO Isolation Centre and Gbagada Isolation Center to contain the rising cases and re-flattening the curve in the shortest possible time.

“Over the last few weeks, the demands for oxygen has risen from 70 six-litre cylinders per day to 350 six-litre cylinders in our Yaba Mainland Hospital. This is projected to more than double to 750 six-cylinders, before the end of January 2021,” the statement by the Chief Press Secretary to the Governor, Gboyega Akosile said.

“ln addition to providing oxygen at our isolation centres, the Lagos State Government has decentralized the availability of oxygen across the State through the provision of 10 oxygen and sampling kiosks. Oxygen therapy and other related services will be provided to patients that require them.

“Five of these 10 oxygen centers have been commissioned while the remaining five will be ready for use within the next four weeks. It is our expectation that these sampling kiosks would be easily accessible to residents that require oxygen therapy at the level of LGAs as stabilization points prior to onward transmission to our Isolation centres, if required.

“This strategy is to further increase the fighting chance of Lagos residents that have contracted the virus and require immediate oxygen therapy,” he said.

Speaking on issues surrounding the resumption of schools in Lagos State in compliance with the directives of the Federal Government, Governor Sanwo-Olu said commencement of school activities on Monday “was a difficult decision to make in light of the second wave of COVID-19, but I assure you it was the best decision for our children's safety and long-term development, especially our most vulnerable children.” A file photo of Lagos State Governor, Babajide Sanwo-Olu. Photo: [email protected]

Stressing the need for students to return to school to continue their education at various levels, Governor Sanwo-Olu disclosed that almost 24,000 students are yet to report in public schools after last year's lockdown necessitated by the first wave of COVID-19 in Nigeria.

“Last year after the first lockdown and kids have to come back to school, we are still looking for about 24,000 of them that have not come back to school. So, there is a challenge if you keep them out for that long and their parents or guardians now turn them to other things instead of ensuring that they have time to come back for learning even if it is twice or thrice a week.

“At least they have been registered since the beginning of a session and they can be monitored. If not, they will just be roaming the streets and become endangered. We have seen incidents of child abuse and all unprintable things that are being done to these children. So, we believe to a large extent that schools sometimes happen to be the safe-haven for them. We have done the roster in which we ensure they keep social distance and we are monitoring,” he said.

Governor Sanwo-Olu also revealed that the Lagos State Government has opened discussions with some vaccine manufacturers to ensure that residents are catered for.

He said: “We are closely monitoring ongoing action by the Federal Government to procure COVID-19 vaccines for use in Nigeria. We have also opened discussions with vaccine manufacturers so that when the vaccine comes eventually we can ensure that Lagosians are catered for.

“In the meantime, we are developing a strategy that will articulate the criteria, guidelines and regulatory framework for providing and monitoring vaccinations in Lagos.

“The Lagos State Government is actively partnering with the private sector in the management of the COVID-19 pandemic, in the areas of testing, oxygen deployment, as well as the clinical management of moderate to severe cases. These partnerships have helped enhance the State's response to the ever-changing circumstances of the pandemic.

“In a bid to further explore this proven synergistic approach, the Lagos State Government is currently reviewing the feasibility of Public-Private Partnerships (PPPs) for the management of some of our public isolation centres. It is our hope that this would expedite the re-opening of previously closed centres, and also avail us the benefits of the operational cost-efficiencies that experienced private sector management can bring to bear.”