When The World Becomes Too Much With Stingy Men! 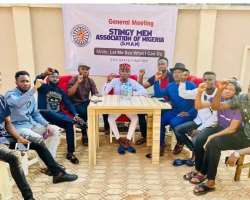 When my 17-year old son, Daniel, cursorily read the speech delivered by the Chairman of an event I covered as a Reporter in Ikorodu on December 13, 2020, he was unarguably perplexed over the achievements recorded by the Club in the year as conveyed by the speech. For the sake of clarity, it suffices in this context to say that the event revolved around the official presentation of Lion (Comm) Adefunke Oluranti Esan as the 17th President of Ikorodu Metropolitan Lions Club, and the installations of other officials for 2020/21 Lions Year of the Club. He was perplexed that the Club was able to record such magnitude of developmental projects within several communities in Ikorodu, and at the same time told me that for the Club to have being able to achieve such impressive successes that its members must be philanthropically disposed, and not parsimonious. He screamed, “Daddy, this Club is somehow competing with Ikorodu Local Government in terms of Projects executed through the members within the year.

Without any iota of exaggeration, his excitement over the achievements recorded by the Club within its area of jurisdiction cannot be said to be misplaced as much was achieved within Ikorodu in terms of development.

For instance, the Club donated more than 500 pieces of hand sanitizers with equal number of customized nose masks to residents. Before the foregoing donations were made, it has embarked on various kinds of youth developmental projects that cut across job creations, empowerment and promotion of academic excellence in schools that are located within the local government area through the purchases of text books, exercise books, and other educational materials including the outright constructions and refurbishment of chairs for the schools. Also, the club is known to have embarked on offsetting bills that emanated from eye surgeries for the elderlies in the entire community. Surprisingly for my son, the Club has for years been striving in the same developmental efforts, and still wished to do more in upcoming years.

Ostensibly impressed and inspired by the achievements recorded by Ikorodu Metropolitan Club within the spate of one year, Daniel asked, “Daddy, how can I become a member of this club? I told him we shall discuss that after his graduation from the university in future, and hopefully when he starts working. He consented. I further enlightened him that there are similar Clubs in the country that are committed to developmental projects and service to humanity, and noted that they are called service clubs. Among other clubs I mentioned were Rotary Club with its sister Club known as Rotaract Club, Metropolitan Club, and Peoples Club among others. I, however, warned him that he should be very meticulous in joining clubs when the time comes as some have spiritual coloration, and that that may not augur well for him as he is a Christian.

I must confess that having sown the seed of making meaningful contributions to the society in him through clubs or associations that I was somewhat fulfilled as I had no doubt that he was righty indoctrinated on the benefits of joining a well-meaning service club in future. To this end, I was proud to have satisfactorily played my fatherly role in that regard.

However, in the recent weeks, precisely last week, he came to me, and apprised me of how he has been bombarded on his Facebook page with information that bothered on “Stingy Men Association of Nigeria (SMAN)” to which I told him I am aware of the overbearingness of the association which in every sense of the word has somewhat remained amorphous as no one can pointedly say what it is all about.

However, from what I have been able to gather from the virtual space so far, the association, which has been gathering momentum online has the ‘Dorobucci crooner’, Don Jazzy, as the ‘Head of Union’. The foregoing fact was verified as the Nigerian singer and music producer, Don jazzy, shared his membership ID card on his Twitter handle.

As gathered, the association which began in Zambia as a social media trend where Zambian men pledged to pass K5 Zambian currency to their girlfriends but rather invest and earn from it, is replicated by Nigerian men to catch ‘cruise’ online.

According to the Zambian Observer, a Zambian, Mr Loenard Mweembe, was reportedly arrested for assault after beating up his wife because she asked him for money to make her hair. Mrs Mweembe, the wife to the suspect, asked her husband money for her hair a week before but the husband kept replying he is now a member of Stingy Men Association of Zambia (SMAZ) and cannot afford to give her a K150 but rather a K10.

“It started like a joke,” explained the injured wife who was later rushed to Ndola Teaching Hospital.

Judging from their motto which reads: “Let Me See What I Can Do”, men belonging to the association will always give excuses whenever someone, especially a woman asked them for financial support.

Against the foregoing backdrop, there is no denying the fact that there is already a clash of values resulting from what Lion Club, Rotary Club and their likes represent and what Stingy Men Association represents. The fact is that Lion Club, Rotary Club and their likes are committed to giving to the society and ensuring they contribute to the betterment of humanity; whether man or woman while SMAN is committed to withhold what it has from the society.

For the sake of clarity, values are things that are seen as “good” and “desirable”, For instance, in parenting, parents are wont to imbibe values to their children, just the same way society imbibed the people with societal values. Seen in this context, caring and protecting one’s spouse through the use of financial means are values that are highly cherished in African culture. It is therefore an anathema to see some men called stingy men bringing such value to ridicule and devaluation.

Paradoxically, while the world is becoming too interesting and more habitable for members of Lion Club and other clubs with the same philosophical orientation that are committed to donating towards the betterment of the society, members of SMAN are collectively resolved to always tighten and withhold their helping hands from those that seek their assistance; in this case, either their wives or girlfriends.

At this juncture, it is apt and fitting to say that the poet, William Woodsworth, who lived from 1770 to 1850 descriptively captured the trouble with stingy men in his poem, “The World Is Too Much for Us”, which invariably formed the basis of the coinage of this piece. He remarkably captured the plight of stingy men in the first stanza of the poem thus: “The world is too much with us; late and soon/Getting and spending, we lay waste our powers/little we see in nature that is ours/We have given our hearts away, a sordid boon!”

As can be deduced from the foregoing, the poem opens with a severe attack on man’s obsessive desire for material things, which cannot offer him real satisfaction. He is only blindly engrossed or deeply buried in profession; food, cloth, and shelter so much so that he has lost sight of the natural beauty and enormous power of his natural environment. In this context, he has lost sight of the values and power of a woman to humanity.

To my view, it is high time stingy men among us are told that Psalms 49 verse 1 says, “God is our refuge and strength, a very present help in trouble.” In this context, they should be told that “God is the refuge and strength of Nigerian women, and He is their present help in trouble”. In the same vein, they should be told that Psalm 68:6 has it that “God sets the solitary in families; He brings out those who are bound into prosperity; but the rebellious dwell in a dry land”.

The most salient message this writer, like other men that are considered to be gynophilic like him, would like stingy men to know of is that they should also be told that women have what they too can also withhold. Are you asking “What is it the woman can also withhold?” In as much as the world has become too much with stingy men I am of the view that your guess is as good as mine.