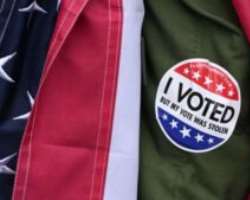 The role played by massive black votes in triggering insurrection

Michael Harriot, The Root
Donald Trump did not cause the Coup Klutz Klan rally on Jan. 6.

While he and his lesser evils are undoubtedly complicit for pushing the counterfactual “Stop the Steal” movement that lit the fuse on the Caucasian Capitol Coup, the story is wider, longer and much less complex.

Most media outlets have condensed the narrative of the Capitol Building terror plot down to four points:

While that narrative is a tidy conclusion of events, placing the blame solely on Trump, Rep. Mo Brooks (R-Ala.), Sen. Ted Cruz (R-Texas), Josh Hawley (R-Mo.) and other enablers is like telling the story of America without mentioning the Virginian who approached the captain of the White Lion in 1619 and asked: “How much are you charging for the Black people?”

In 1870, the United States ratified the 15th Amendment , declaring that “The right of citizens of the United States to vote shall not be denied or abridged by the United States or by any State on account of race, color, or previous condition of servitude.” Although most historians focused on the formerly enslaved Black voters in the South, before the 15th Amendment, states like New York and New Jersey forbade African Americans from voting. ( New York rescinded its ratification of the 15th when legislators realized Black people were included in the word “citizens.”)

Millions of Black men registered to vote (women were not yet allowed to vote). After the passage of the 15th Amendment, Mississippi's voting-eligible population was suddenly majority-Black, and the Black voter registration rate was more than 90 percent. After the Compromise of 1877 formally allowed states to disenfranchise Black people with “Jim Crow” laws, Mississippi initiated poll taxes, literacy test and a grandfather clause. By 1892, the state's Black voter registration dropped to six percent .

This is why the highest turnout in the history of presidential politics happened in 1876, when Black voter suppression tactics were not yet enshrined into law. It was not the white supremacist violence and terrorism that stopped Black people from voting; it was legal voter suppression that did it. The Big Lie

Since then, a complex web of voter purges, voter ID laws, poll closings and misinformation has formed a barrier that specifically targets Black voters . It's not a coincidence that voter purges disproportionally contain Black and Hispanic voters. Wisconsin's voter ID law affected 8 percent of white voters and 27 percent of Black voters. States also closed thousands of polling places in poor and minority neighborhoods, which is why it takes 29 percent longer to vote in a Black neighborhood than a white neighborhood, according to a UCLA study . A 2018 stud y showed that it's more difficult to vote in Republican-controlled states.

To justify these laws designed to uphold white supremacy and maintain power by decreasing the Black vote, conservatives created the myth of widespread voter fraud. And of course, because the American education system doesn't encourage logic and teaches the whitest version of history possible, white people actually believe that Black people just don't want to vote. The actual history of this country is inconsequential to people who think Black people have simply grown lazy waiting on our government handouts.

But, instead of incremental changes through court cases, protests and the sheer, unstoppable will of Black people, what if there was a singular incident that removed all of the artificially manufactured barriers to voting? What would happen if something like a global pandemic ushered in sweeping changes like online registration, absentee ballots and early voting? What would happen if Black people had equal access to the polls?

I'm sure something like that would lead to more unfounded conspiracies about widespread voter fraud. It is easier to believe in a disprovable lie than to believe you have been waving a flag for a country that has stepped on the necks of Black people for four centuries. It is easier to believe a big lie than to admit that your beloved country duped you into upholding a white supremacist regime that involves your teachers, grandparents, parents, party and the president you love with all your heart.

I know you're wondering: “What does this have to do with Donald Trump, the Stop the Steal movement and the conspiracy to destroy democracy?”

Well, according to the U.S. Elections Project , the percentage of eligible voters who cast ballots in the 2020 election ( 66 percent ) shattered the modern record for voter turnout.

There is no widespread voter fraud. There never has been. And the proof is this: When Black people were allowed to participate in the most secure election in history , they changed the entire political makeup of America's government. And they did it without bloodshed, violence or an organized lynch mob.

Still, this is not Trump's fault. Ted Cruz had nothing to do with this. Mo Brooks, the Republican party or the QAnon did not attempt to destroy the American democracy. If this whole hullabaloo has taught us anything, it is this:

America is not a democracy.
And that is the big lie.
The story of the Capitol siege is that there was an election where, finally, voter suppression was erased and Black voters voted in the same percentage that white voters did. And the only way most of white America could explain it was to believe that state legislators, secretaries of states, voting machine companies, invisible voters, Hugo Chavez , Democrats and the sequential nature of the numerical system all conspired to steal an election. It was easier to believe in that improbable scenario than to believe that America was racist this whole time.

Oh, America, can't you see that Black people are not ever going to stop fighting for what's ours?

And we are going to win.
Until all people are included in the promise of America, this country will continue to fall apart.

*But you should still expel Ted Cruz, just in case.

This article apeared in The Root as The Biggest Lie: Why Mainstream Media Is Telling the Whitewashed Version of the MAGA Insurrection