By Cary Wallace, The Time 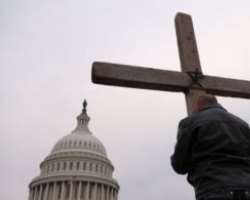 In the past few days, I've seen all kinds of statements from Christian leaders trying to distance themselves from the violent mob at the Capitol . Christian writers known for their thoughtfulness lament that “somehow” white supremacy has crept into our churches, and the faculty of a major evangelical institution put out a manifesto saying that the events at the Capitol “bear absolutely no resemblance to” the Christianity they teach. That mob, they're telling us, is a fringe element. They've radically misunderstood the real message of American Christianity.

This could not be further from the truth.
I believe the mob at the Capitol has radically misunderstood the teachings and life of Jesus. But it is an absolutely logical conclusion of white American Christianity.

Hundreds of years ago, the Church laid the foundation for the theft of the Americas, enslavement of Africans and Native Americans, and centuries of brutal colonization worldwide, with the doctrine that it was O.K. to take land and liberty from people who were not Christian.

Within their first decade on this continent, the holiness movement of the Puritans, who told themselves they'd come to the “new world” to spread the gospel, had virtually exterminated the Pequot people, and enslaved many survivors. And Roger Williams, the Massachusetts minister who became the first advocate for religious freedom and the separation of church and state, was banished from his colony by his fellow Christians for objecting to government attempts to enforce the first four of the Ten Commandments, refusing to swear an oath of loyalty to the government of Massachusetts and saying grace over his meals at the wrong time. Alone and sick, he fled into the New England winter, which almost killed him. Though his fellow Puritans gave lip service to the idea that they had come to the continent to share the light of Christ, he was the only one who bothered to learn local customs or languages. Saved that winter by the Narragansett people, he was without a church home when he died years later.

Williams' doctrine of the separation of church and state was eventually inscribed in the American Constitution. And Thomas Jefferson's Declaration of Independence reflects the strong influence of Christianity in the American colonies, by rooting the rights it demands in our status as creatures of God . But the Declaration of Independence also describes Native Americans as “merciless Indian savages,” and the Constitution defined African-Americans as only three-fifths of a person. Despite America's early public piety, this country is explicitly founded on the idea that the people who built its farms, roads, cities and wealth, without freedom or payment, are not quite human. And despite Jefferson's rousing insistence on the equality of “men” in the eyes of God, his own wealth came mainly from a factory he staffed with enslaved children .

Sentimental depictions of Christian faith among enslaved people are popular with American Christians, and the rich tradition of gospel music, perhaps America's greatest contribution to world culture or the church, was unquestionably created by people living in American slavery. But people in slavery in America did not start becoming Christian in large numbers until around 1800 , because American slave-holders avoided sharing Christian teaching with the people they enslaved , so that they wouldn't find themselves in the position of holding fellow Christians in slavery, which might force them to give up their “property.”

For early voices that spoke out against slavery within the American church, the price was high. Benjamin Lay, who shamed the Quakers into becoming abolitionist s with stunts like standing outside meetinghouses on Sunday morning barefoot in the snow to remind the good Christians of the condition of the people they held in slavery at home, died unwelcome as a member in any Quaker church.

For the vast majority of American history, Christian ministers have spoken with passion and vigor in favor of slavery , segregation , and white supremacy. Not even all Christian abolitionists were convinced of the full humanity of the people they fought to free. The Ku Klux Klan is a movement deeply rooted in the church, in both the North and the South.

When Black Christian clergy organized the 1963 March on Washington , where Martin Luther King, Jr., a Baptist minister, delivered his “I Have A Dream” speech, Christianity Today, founded not even a decade earlier by Billy Graham , and edited at the time by one of evangelicalism's most prominent theologians, Carl F.H. Henry, called it “a mob spectacle.”

These are not minor aberrations, sidenotes to our history, either as a country or a church. White supremacy, racism and segregation are a cancer running through our major organs. And our apathy toward them, or our comfort with them, compromise and threaten to kill all the other good we hope to do.

We cannot get rid of them by pretending they're not central to our history, and central to the way we live today. And in our hearts, we know they are. That's why so many Christian institutions and leaders have failed to speak out directly against racism and white supremacy, instead taking refuge in recent days in vague calls for prayer and healing. We know if we confront these foundational American sins directly, their supporters will cause convulsions that may tear our institutions apart – and knock us from our coveted positions.

But there can be no healing without this direct confrontation. You cannot cure cancer by pretending it is not there.The white American church can't pretend that the mob at the Capitol is not part of us.

It is us.
To have any hope of healing, we must acknowledge that fact. We must admit our own ignorance. Our own apathy. Our own discomfort with people who are different from us. Our own desire to believe that we're better than everyone else. Our own willingness to take things that are not ours, and keep things we did not earn. Our profound bent to lie about ourselves. Our willingness to do violence to get what we want. Our willingness to turn away when violence is done to others, because it benefits us.

As Christians, we must forcefully, publicly name and repudiate these things. We must be honest about how long a history they have and how deep they go. And about how much work it will take to eradicate them.

And we must do that work.
Claiming that mob isn't us might help American Christians beat back the sickening waves of shame and fear we feel at the revelation of the ugly truth of what we've been part of all this time.

But it won't save the life of the American church.

And it will never set us free to be anything better than what we are now.