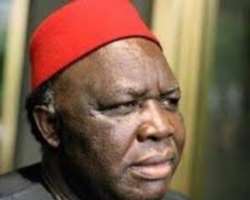 President-General of apex Igbo socio-cultural organisation, Ohanaeze Ndigbo, Professor George Obiozor, has promised to make security of the race one of his top priorities.

Obiozor, who also promised not to disappoint the Igbo, unveiled a four-point agenda covering security, economy, education, and peace and reconciliation.

Thanking Ndigbo for electing him, Obiozor said: ”I know this is no easy decision on the part of Ndigbo or even my humble self. But I promise you all and my God, that I shall take up to the best of my ability to tackle the challenges and the responsibilities that come with the hallowed office with honour, dignity, dedication, decency and decorum.

”My dream type of leadership is leader/manager model, using the most and best available efficient persons and instruments to achieve Igbo collectively defined objectives. I believe this can be done without malice but with diplomatic dexterity, decency, candour and decorum.”

Noting that his decision to contest for the office was not based on personal ambition or self-aggrandisement, which he said he had outgrown, the former ambassador to the United States of America said: ”My most compelling necessity was service, a timely and crucial service at one of the most critical times in Nigeria's history with dire consequences, particularly for Ndigbo as a national entity.

”Indeed, not only has governance become both difficult and complex in Nigeria, but down right an existential threat to Ndigbo in particular. The Igbo dilemma in Nigeria has come at last. And the time requires a very careful and delicate skilled manager in the relationships between Ndigbo and other Nigerian nationalities especially the national power elites. This requires a mature and experienced person with a capacity to build enough consensus to define and defend the interest of Ndigbo.”

His words: ”Ndigbo must be safe at home and abroad. Ndigbo must never again be victims of circumstances they did not create nor can they control. Security of Ndigbo, young or old will be a priority in my tenure. And security does not come alone, it comes with justice. Therefore, we must always seek justice, equity and fairness no matter how difficult or how long it takes to achieve them.”

For successful and continuous progress and prosperity of Ndigbo all over the world, Obiozor said he would ”continue with religious zeal and commitment” the South-East Economic Stabilisation fund established by his immediate predecessor, Chief John Nnia Nwodo.

On education, he promised to work with Igbo-speaking state governors to revamp the education system because ”the neglect of education has nearly thrown Ndigbo into incremental irrelevance in Nigerian politics and other national events.”

Appealing for the support of Ndigbo to achieve these objectives, he said: ”We must make peace among ourselves. We must engage in healing Igboland, spirit of reconciliation and harmony among Ndigbo. Peace must reign in Igboland.”

23 men, two women leading Ndigbo
To work with Obiozor in pursuit of these goals are 22 men and two women, who were elected as members of the Ohanaeze National Executive Committee.

Yakassai, Obioha, others greet Obiozor
Meanwhile, salutations have continued to trail Obiozor's election with leaders urging the erudite diplomat to use his new office to boost the development of Ndigbo and the Nigerian society at large.

In a congratulatory message to Obiozor, Alhaji Tanko Yakassai said: ”My dear George, I am happy to send my congratulatory message to you over your recent election as President General of Ohanaeze Ndigbo. This is one of the best things that happened to the organization right from its inception to date. Your election couldn't have come at a better time. Your election came at the time Nigeria needs an Ohanaeze leadership that can bring his wealth of experience, diplomacy and national connections to assist in cementing the unity and solidarity among different peoples of this great country stronger than ever.

I am relieved that by your election the Organisation has now got the type of leadership it requires to make the unity of Nigeria stronger than it has been for sometime. As the only Igboman that can call any geopolitical zone in the country as his home, I congratulate you from the bottom of my heart George. I wish you a very successful tenure as leader of this great organization that enjoys support and solidarity among all Igbo people both at home and in the Diaspora.”

Obiozor, an asset to Ndigbo — Obioha
A chieftain of Ohanaeze, Chief Ralph Obioha, described Obiozor as an asset to the Igbo race, stressing that his antecedents are not only known and established in Igboland but also in Nigeria and abroad.

Obioha, in an interview, urged aspirants and groups opposed to the former Nigerian Ambassador to Israel and United States to sheathe their swords as Ndigbo can't afford conflict when there is a great need for unity of the Igbo race.

His words: “When Prof. George Obiozor indicated interest for the position of President General of Ohanaeze Ndigbo, most of us were happy because it is good that we have such a quality personality to steer the affairs of Ohanaeze Ndigbo at this critical period. Prof. Obiozor's antecedents are not only known and established in Igboland, but also well known in Nigeria and overseas. Prof. Obiozor is a great asset to Ndigbo, Nigeria and the international community.

“Ndigbo want to rest the leadership of Ohanaeze in such a stable hand. After the stewardship of Chief John Nwodo, which lots of Igbo people have confirmed as a quality stewardship, passing the leadership of Ohanaeze Ndigbo to someone like Prof. Obiozor would augur well for Ndigbo. I appeal to the other group to sheathe their sword and let peace reign.

He also urged Obiozor to reach out to those who aspired with him for the position and assure them that he would run an all inclusive government in Ohanaeze.

On the election of a parallel national executive committee, Obioha said; “It is unfortunate that this development came at this time. At the juncture we have found ourselves in Nigeria today and considering the pandemic, economic and security situations as well as other social problems, it is to the utmost interest of Ndigbo to try to close ranks on matters that may be stoking on personality challenges. Ndigbo also need to close ranks and given Nigeria's situation today, Ndigbo do not have the pleasure of having conflicts within or outside. This is why the opposing group must join Obiozor to take Ohanaeze Ndigbo to greater heights.”

Congratulating Obiozor and other new Ohanaeze leaders, Deputy Minority Leader of the House of Representatives, Hon. Toby Okechukwu, enjoined Obiozor to deploy his wealth of experience in public service to unite Ndigbo for the good of the Nigerian society.

He also called on other members of the newly elected Ohanaeze national executive, including the Secretary-General, Ambassador Okey Emuchay and the National Publicity Secretary, Hon. Alex Ogbonnia to work for public good.

“Ambassador George Obiozor has the requisite experience and track record of untainted public service. We, therefore, expect him to also exploit his national and international exposure for the good of our people”, Okechukwu said in a statement.

Group tasks Obiozor on support for Igbo presidency in 2023

Also, the South-East for Presidency 2023 Movement, SEFORP 2023, a leading pro-South-East 2023 Presidency advocate, has called on the newly elected Prof. George Obiozor leadership of Ohanaeze Ndigbo to be non-partisan and collectively join hands in the pursuit of the 2023 Igbo Presidency project.

Welcoming the new leadership, the group urged the apex Igbo socio-cultural body “to remain non-partisan as a socio-cultural organization of all Ndigbo, but must remain resolute to accept and pursue this divine project”, insisting that “2023 is a litmus test to true Nigeria unity in diversity”.

Speaking at a press briefing in Enugu, the group's National Coordinator, Rev. Okechukwu Obioha said that sustained development “had eluded and continues to elude the country” because the leaders have neglected the tripod of regions that ensured that Nigeria got independence from the European powers.”

Obioha lamented that “more than 50 years, political power had rotated among the North and South, and while the politicians in the two divides of the North and West enjoyed power at the highest level, the East had been relegated, excluded and neglected.” (Text, excluding headline, courtesy Vanguard)