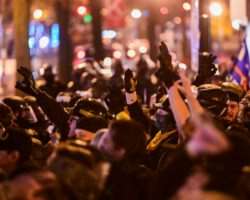 A member of the Proud Boys has been arrested for allegedly planning a second attack on the US Capitol .

Edward Florea, a 40-year-old man from New York that claimed he was a member of the Proud Boys was arrested Tuesday for calling for a second armed insurrection in Washington DC . Supporters of Donald Trump attacked the Capitol last week in an attempt to overturn the 2020 election .

“The joint terrorism task force is holding him on weapons charges after he allegedly wrote online that he is a member of the Proud Boys and wanted to arm people to travel to Washington, D.C.,” the report states.

The Proud Boys are a Southern Poverty Law Centre designated hate group that espouses neo-fascist ideology and whose members assault people at protests.

Former FBI Agent Manny Gomez told the broadcaster that Mr Florea – and others like him – are encouraging violence and breaking the law.

“They’re openly advocating violence. That in and of itself is a crime,” he said. “All local, city and federal law enforcement should be ready, and on standby, and have a plan and have leaders that will enforce that plan,” he said.

The arrest is the latest in a nationwide investigation to locate everyone who participated in the Capitol insurrection last week. The attack on the Capitol left five people dead, including one Capitol police officer.

Aaron Mostofsky, a 34 year-old son of a Brooklyn Supreme Court judge, could face up to 10 years in prison after he was discovered in photos storming the Capitol with a police riot shield and wearing a bulletproof vest.

Lonnie Coffman, a 70-year-old man from Alabama, was also arrested after it was found he had homemade napalm and unregistered pistols in his vehicle during the riot.

The “QAnon Shaman” Jake Angeli – known for his colorful fur and horn costume that he wears to protests – was also arrested and is refusing to eat nonorganic food in prison.

“The FBI will find you, arrest you, and do our part to ensure you face the full force of the federal criminal justice system,” he said. “Regardless if it was trespassing on the Capitol or you planted a pipe bomb, you will be charged and you will be found.”

In the days following the insurrection, the FBI requested help from tipsters to identify all of the individuals responsible for attacking the Capitol.

The US Justice Department and the FBI have created a sedition and conspiracy task force to pursue charges against the people who participated in the insurrection at the US Capitol.

Thus far, charges have been brought against more than 70 people and it has identified at least 170 suspects.

“People are going to be shocked with the egregious activity in the Capitol. No resources of the FBI or the US attorney’s office will be untapped to determine if there was command and control, how it operated and how it executed these activities,” Mr Sherwin said.