History made as U.S. House of Reps impeaches Trump again 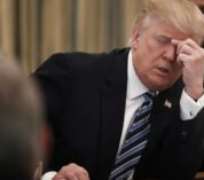 The U.S. House of Representatives votes to impeach Donald Trump for inciting last week's deadly Capitol siege, making him the first president to be impeached twice.

While voting is still under way, a majority of lawmakers has already voted to impeach.

The outcome, which was expected, comes only seven days before Trump leaves office and Democratic President-elect Joe Biden is inaugurated.

The Democrat-controlled House charged Trump with inciting an insurrection after a mob of his supporters, riled up by his false claims of election fraud, stormed Congress and temporarily halted a joint session to certify Biden's victory.

The House impeachment will lead to a trial in the Senate, where a two-thirds majority is needed to convict Trump.

However, an outcome appears unlikely before Biden is sworn in as president.

The resolution is expected to pass in a bipartisan vote, with several Republican lawmakers having said they would join Democrats in voting for impeachment.

The impeachment came after lawmakers debated the charge against Trump – inciting an insurrection – in the same chamber that was evacuated a week ago as his supporters stormed Congress. (dpa/NAN)