We paid N2m ransom; we were not rescued by police: kidnap victim 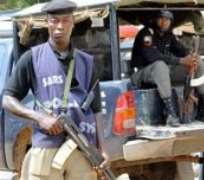 An Ondo indigene, Mr. Gbenga Ibikunle, has give a chilling account of how he was kidnapped along with his wife while returning with members of his family.

He also narrated how his wife's clever lie that she was pregnant saved her from being gang-raped by hoodlums who kidnapped him along with his wife and three children.

He spoke to journalists in Akure, Ondo State capital.

Ibikunle said the kidnappers attacked them at Uso village along the Akure-Owo highway last Sunday.

He said the kidnappers took the couple and locked the children inside the car.

Ibikunle said they were released after three days in captivity and payment of N2m ransom.

He refuted claims by the police that they were 'rescued'.

“I am surprised by the claims that we were rescued by the police. This is nothing but a lie coming from the pit of hell. I can say it boldly that no security agency came to our rescue. We were released around 1 am after ransom was paid to them.

“They collected the ransom along the road without being jittery. In fact, they counted all the money before they released me to my brother, who brought the N2 million”, he said.

Giving further details, Ibikunle said, “We were in the bush with them for three good days without food. They treated us like criminals. They beat us with stick and cutlass. We met a man in their den, who was also released the same way we were. His own family parted with N10 million before he was released.”

“At a point they wanted to rape my wife, but she tricked them that she was pregnant. I am weeping for this country because we are not safe. We can no longer travel.

“We don't have security in this country anymore. It is sad that our security agencies are not effective. The kidnappers carried out their operations with impunity. They boasted that they will kill any policeman that tried to rescue us.”