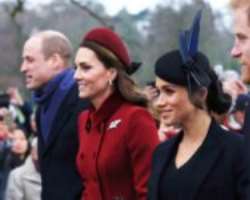 Prince Harry and Prince William are reportedly working on resolving their feud, numerous royal sources have shared over the past week. And a major upcoming step towards rebuilding their relationship? William and Kate Middleton are planning a trip to visit Harry and Meghan Markle in their new Santa Barbara home , an insider told Us Weekly .

According to the source, the brothers “are looking forward to spending time together in person the moment it’s safe to travel,” with their initial reunion likely to take place in the UK. “But at some point in 2021, the Cambridges will travel to Santa Barbara and see the Sussexes on their new home turf.” Exciting! Photo credit: PAUL GROVER – Getty Images

That UK reunion may well take place in June, when the Sussexes are expected to head across the pond for the Queen’s official birthday celebration, Trooping the Colour. The Sunday Times reported over the weekend that Meghan and Harry were planning on attending the event, which will mark their first public appearance in the UK since the Commonwealth Day service last March.

Things are reportedly on the mend between William and Harry , royal expert Katie Nicholl told Entertainment Tonight. “The relationship is much better than it was. For a start, they are on talking terms, and not only on talking terms, they do speak relatively regularly. They were very much in touch over the holidays,” Nicholl said. “But there is an ocean between them, there is a time difference and as Harry [has] said… they are two brothers on different paths.”

Want more entertainment news? You’re in luck! Sign up for our FREE newsletter for even more of the Woman’s Day content you want.