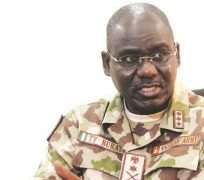 The Nigerian Army has approved the postings and appointments of some Senior Officers.

Announcing the postings on Monday, spokesman of the Service, Brigadier General Sagir Musa, said it “is a routine and normal exercise intended to reinvigorate the system for greater performance and effectiveness.”

Musa the posting was approved by the Chief of Army Staff, Lieutenant General Tukur Buratai.