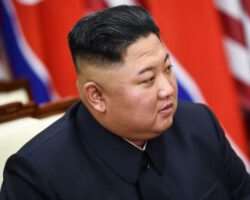 Kim’s aggressive remarks, especially those related to nuclear weapons, are viewed by experts as a message to the incoming Biden administration. “It lights a fire under the Biden administration,” Ankit Panda, a Stanton Senior Fellow in the Nuclear Policy Program at the Carnegie Endowment for International Peace, told Bloomberg . “Kim is making clear that if Biden decides not to prioritize North Korea policy, Pyongyang will resume testing and qualitatively advancing its nuclear capabilities in ways that would be seriously detrimental for Washington and Seoul.”

Cheon Seong-whun, a former president of the government-funded Korea Institute for National Unification think tank in Seoul, added that Kim is trying to pressure Biden into accepting North Korea as a nuclear state, and he expects Pyongyang to move forward with a series of provocations after the White House transition.

It’s not a new strategy for Pyongyang, which has a history of trying to rattle new American presidents, Bloomberg notes . Former President Barack Obama and President Trump both saw North Korea test a series of weapons upon taking office.