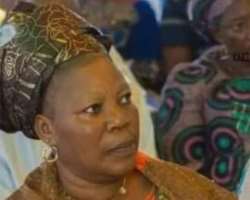 The family of Madam Serifat Adisa, a retired nurse and namesake of a deceased business merchant, has disclaimed rumours making the rounds on some social media and blogs that their mother is dead.

According to the first son of the aggrieved, Mr Idris Adisa, "it is mischievous to attribute my mother's picture to the obituary news of a business woman recently murdered at Ibarapa in Oyo State, adding that her mother, Serifat (Temitayo) Adisa is alive, hale and hearty.

He said although there was a semblance in the deceased's and his mother's name, bloggers and social media users should have done their findings well in selecting the right picture instead of wrongly using his mother's picture.