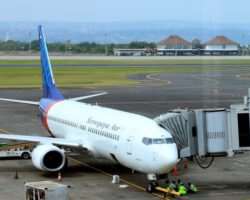 A Sriwijaya Air plane reportedly carrying more than 60 people lost contact after taking off from the Indonesian capital Jakarta on Saturday.

A statement released by the budget airline said the Boeing 737-500 was on an estimated 90-minute flight from Jakarta to Pontianak, capital of West Kalimantan province on Indonesia's Borneo island.

There were 56 passengers and six crew members on board.

Surachman, a local government official, told Kompas TV that fishermen found what appeared to be the wreckage of an aircraft in waters north of Jakarta and a search was under way. Other news channels showed images of suspected wreckage.

“We found some cables, a piece of jeans, and pieces of metal on the water,” Zulkifli, a security official, told CNNIndonesia.com.

Reliable tracking service Flightradar24 said on its Twitter feed that Flight SJ182 “lost more than 10,000 feet [3,000 metres] of altitude in less than one minute, about 4 minutes after departure from Jakarta”.

Indonesian transportation ministry spokeswoman Adita Irawati said in a statement the missing plane is currently under investigation. “It last made contact at 2:40pm [0740 GMT],” she said.

The aircraft is a 27-year-old Boeing 737-500, according to registration details included in the tracking data.

Indonesia, the world's largest archipelago nation with more than 260 million people, has been plagued by transportation accidents on land, sea and air because of overcrowding on ferries, aging infrastructure, and poorly enforced safety standards.

A Boeing 737 MAX operated by Indonesian airline Lion Air crashed off Jakarta in late 2018, killing all 189 passengers and crew. The plane that lost contact on Saturday is a much older model.