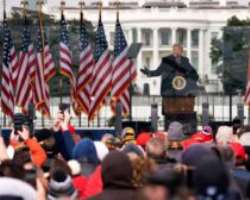 “Disgusting,” tweeted Jason Miller , a longtime Trump adviser. “Big Tech wants to cancel all 75M @realDonaldTrump supporters. If you don't think they're coming for you next, you're wrong.”

“Leftists at @Twitter permanently ban President Trump,” wrote Tom Fitton , president of the right-wing group Judicial Watch. “This is all about politics.”

“Silencing people, not to mention the President of the US, is what happens in China not our country. #Unbelievable” tweeted Trump's former ambassador to the United Nations, Nikki Haley .

“Banning the President of the United States and making it impossible for @POTUS to communicate with his 88 million followers – AND the 74 million people who voted for him – is the biggest mistake @Jack and the fascists of Silicon Valley have ever made,” wrote Trump's former deputy assistant, Sebastian Gorka .

Trump's account was taken down Friday, two days after a violent mob broke into the Capitol and sent the complex into lockdown. Trump's account was suspended for 12 hours in light of the attack, but Twitter permanently disabled his account after the president tweeted a message rallying his supporters.

“The 75,000,000 great American Patriots who voted for me, AMERICA FIRST, and MAKE AMERICA GREAT AGAIN, will have a GIANT VOICE long into the future. They will not be disrespected or treated unfairly in any way, shape or form!!!” Trump tweeted Friday. Twitter cited the tweet in its statement shutting down his account.

“We have determined that these Tweets are in violation of the Glorification of Violence Policy and the user @realDonaldTrump should be immediately permanently suspended from the service,” Twitter wrote in its statement.

Trump later denounced the move in a thread on his official White House account, claiming Twitter was coordinating with the left to stifle free speech. Using the capitalizations and ellipses signature to his Twitter style, Trump vowed “We will not be SILENCED!” and told his followers to “STAY TUNED!”

Less than 10 minutes later, those tweets were removed.

Twitter had also purged a swath of accounts Friday for espousing QAnon-related content. Among those accounts were some of the president's most vocal supporters, including former National Security Adviser Michael Flynn and former Trump attorney Sidney Powell.

One of Trump's lawyers, Jenna Ellis, tweeted that she'd lost 10,000 followers Friday and urged her followers to connect with her on Parler, a social media platform popular among right-wing circles discomfited by other sites' rules of decorum.

Mark Levin, a Trump-friendly radio show host, said he was going off of Twitter in solidarity with users whose accounts were shut down, encouraging his followers to migrate to alternative platforms.

“I have suspended my own Twitter account in protest against Twitter's fascism. I ask all my followers to join me now on Parler and Rumble,” he tweeted.

Apple threatened to boot Parler from its app store Friday if it doesn't introduce a better moderation plan, BuzzFeed News reported . Google suspended the app from its Play Store for failing to rein in posts that encouraged public acts of violence, according to a Google spokesperson Friday.

Sen. Mark Warner, ranking member of the Senate Intelligence Committee, tweeted in response to the news: “An overdue step. But it's important to remember, this is much bigger than one person. It's about an entire ecosystem that allows misinformation and hate to spread and fester unchecked.”

The president's son, Donald Trump Jr., likened the move to George Orwell's “1984,” a common comparison among right-wing circles when they feel their speech is being limited.

“We are living Orwell's 1984. Free-speech no longer exists in America. It died with big tech and what's left is only there for a chosen few,” the younger Trump tweeted. “This is absolute insanity!”

The younger Trump also pointed out that Ayatollah Ali Khamenei of Iran still is allowed on the platform — he runs multiple accounts in different languages — and said it was hypocritical to allow dictators with sordid human rights records to maintain their presence on the site.

“Mao would be proud,” Don Jr. said.
Sen. Lindsey Graham (R-S.C.) made a similar point in a Twitter thread Friday evening, saying he was “more determined than ever” to repeal Section 230, a measure that protects internet platforms from lawsuits concerning third party content.

In the aftermath of the initial purge of QAnon-related accounts, former Trump 2016 campaign adviser George Papadopoulos tweeted “Echo chambers are unhealthy for a democracy. Suppressing ideas and banning accounts does not take away ideas, it amplifies them, and makes finding common ground impossible. That looks like the plan.”

After Trump's account was suspended only minutes later, Papadopoulos followed up : “That was quick.”