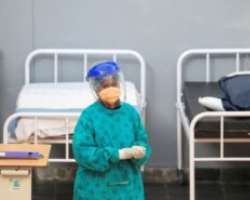 In a Twitter update via its verified handle, the government agency said there are now 97,478 confirmed cases of the disease caused by the novel coronavirus in Nigeria.

A total of 78,552 people it stated, have so far been discharged from hospital, while the number of deaths so far is 1,342.

As of Friday, more than 88.1 million cases of COVID-19 had been reported worldwide, with more than 49.1 million of those considered recovered or resolved, according to Johns Hopkins University's COVID-19 case tracking tool. The global death toll stood at more than 1.9 million.

According to the CBC, South Africa, the hardest-hit nation in Africa, said this week it will import 1.5 million doses of the AstraZeneca vaccine to inoculate the country's health workers.

While the US alone has seen more than 21.5 million cases of COVID-19 and 365,000 deaths, according to Johns Hopkins, more than 4,000 COVID-19 deaths were reported on Thursday alone, according to the US-based university. The New York Times, which has also been tracking COVID cases and deaths in the U.S, put the number of deaths reported Thursday even higher, at 4,111.

Brazil, which has seen more than 7.9 million cases of COVID-19, passed a grim milestone as its death toll surpassed 200,0000. The health ministry said Thursday that the country had 1,524 deaths in the previous 24 hours, rising to a total of 200,498 for the pandemic.