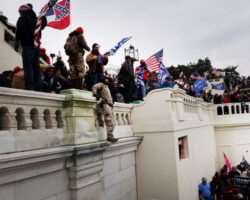 Namita Singh, INDEPENDENT
Getty Images)” />
Condemning the violent rioters who stormed the Capitol on Wednesday, acting attorney general Jeffrey Rosen in a statement assured that those responsible for the attack would “face the full consequences of their actions under the law.”

The protesters are liable to be punished with up to 10 years in prison for “injury of federal property,” under the executive order signed by President Donald Trump during the Black Lives Matter anti-racism protests in July 2020.

“I just had the privilege of signing a very strong Executive Order protecting American Monuments, Memorials, and Statues – and combatting recent Criminal Violence,” Mr Trump wrote on Twitter on 26 June, after people took to the streets in the wake of George Floyd 's murder. “Long prison terms for these lawless acts against our Great Country!”

Mr Rosen, in the statement, did not mention a specific punishment or refer to the executive order.

“Our criminal prosecutors have been working throughout the night with special agents and investigators from the US Capitol Police, FBI, ATF, Metropolitan Police Department and the public to gather the evidence, identify perpetrators and charge federal crimes where warranted,” he said.

“Some participants in yesterday's violence will be charged today, and we will continue to methodically assess evidence, charge crimes and make arrests in the coming days and weeks to ensure that those responsible are held accountable under the law,” Mr Rosen continued.

The FBI has sought assistance from the general public in identifying individuals involved in instigating the violence and has requested witnesses to share pictures, photos and videos on its website .

A mob of thousands of pro-Trump rioters attacked the Capitol Hill perimeter shortly after Mr Trump told them, as he repeated his unsubstantiated claims of voters fraud: “We’re going to walk down to the Capitol. You have to show strength, and you have to be strong.”

At least five people died during the riots, including a police officer who died in hospital late on Thursday. Members of Congress from across the ideological spectrum have demanded the removal of Mr Trump from the Oval Office in the wake of the attack.

It was not until after the violence was well underway that Mr Trump told his supporters to “respect the law”, while falling short of asking them to leave the premises.

“I am asking for everyone at the US Capitol to remain peaceful. No violence! Remember, WE are the Party of Law & Order – respect the Law and our great men and women in Blue. Thank you!” he tweeted on Wednesday evening.

As the situation worsened further, he followed up the tweet by posting a short video on Twitter where he asked the rioters to go home, but told the mob: “We love you. You’re very special.”

Social media users were quick to highlight the contrast in his messaging as they dug up his support for the executive order during the Black Lives Matter protests.

Television producer Kyle Griffin posted a screenshot of Mr Trump's tweet in July, and wrote: “Flashback: July 27. Trump called for protesters who damaged federal buildings to get a minimum of 10 years in prison.”